About 10 dead in jihadist attack on I.Coast border post

By Aly OUATTARA with Patrick FORT in Abidjan 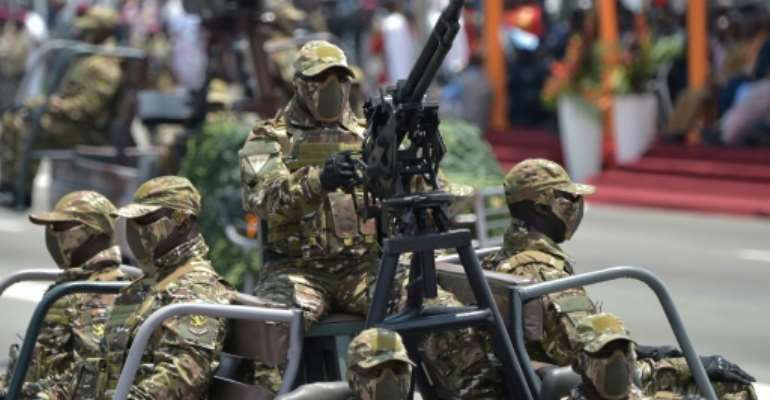 Security analysts have long worried that a jihadist revolt in the Sahel that began in Mali in 2012 is spreading towards coastal states on the Gulf of Guinea. By SIA KAMBOU (AFP/File)

It is the first assault by Islamist extremists on Ivorian soil since March 2016, when a raid on the southeastern beach resort of Grand-Bassam left 19 people dead.

Thursday's shooting attack "targeted an Ivorian frontier post at Kafolo," where an anti-jihadist operation had just ended, one Ivorian source said, in an account confirmed by a Burkinabe source.

An Ivorian source said 12 people were killed -- 11 soldiers and a gendarme -- while six people were injured and two were listed as missing.

Another Ivorian source put the toll at nine dead, while a Burkinabe source said 10 troops, a gendarme and an assailant had been killed, and two people were missing.

'Hiding in our houses'

"There were sounds of rifles toward the river," an anonymous Kafolo resident said in a telephone interview.

"There were sounds of military cars speeding through the village. We are afraid. The sounds of guns have been going on since early this morning. And it's still going on."

"We are hiding in the houses with our families. The military has forbidden us to go out. Everything is closed," he said, adding that residents are normally in the fields growing cotton and peanuts in the arid area.

The attack was carried out by dozens of armed individuals believed to be from the Group to Support Islam and Muslims (GSIM), which has a hold in the area, according to a source in Burkina Faso.

Security analysts have long worried that a jihadist revolt in the Sahel that began in Mali in 2012 is spreading towards coastal states on the Gulf of Guinea.

Operation to flush out jihadists

The latest attack began at around 3 am, and took place in the same zone of northeastern Ivory Coast where the two countries last month launched a ground-breaking joint operation to flush out jihadists.

"Operation Comoe," named after a river that flows through the two countries, led to the death of eight suspected jihadists, the capture of 38 others and the destruction of a "terrorist base" at Alidougou in Burkina Faso, the Ivory Coast army said on May 24.

The operation was launched after jihadists were spotted last year to the north of Ivory Coast's Comoe national park.

Security sources say they are jihadists operating in Burkina Faso who hole up in Ivory Coast.

The Grand-Bassam attack four years ago was claimed by Al-Qaeda's North African affiliate, Al-Qaeda in the Islamic Maghreb (AQIM).

Several jihadist attacks have taken place near the border on the Burkina Faso side, but never before on the Ivorian side.

Burkina Faso has been hit by numerous jihadist attacks that have killed nearly 1,000 people since 2015.

Jihadist violence, often intertwined with inter-communal violence, has resulted in 4,000 deaths in Mali, Niger and Burkina Faso in 2019, according to the United Nations.

High Court shoot down Agordzo's application to travel
1 minute ago

ASEPA to file RTI request for minutes of Justice Dotse-AG 'S...
1 minute ago