By Patrick Fort and Christophe Koffi 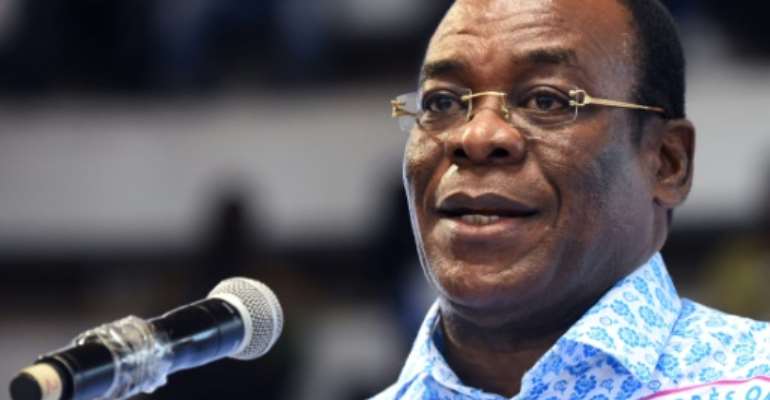 Former Ivorian prime minister Pascal Affi N'Guessan says he will make a run for the presidency in upcoming elections, in a move highlighting fractures within the opposition FPI party.

Affi N'Guessan has tense relations with his former mentor and the founder of the Ivorian Popular Front (FPI), ex-president Laurent Gbagbo, who lost an armed tussle for control of the country after elections in 2010.

The FPI has split between Affi N'Guessan's "renewal" wing and a loyalist faction called GOR -- the acronym for "Gbagbo Or Nothing" -- which has vowed to boycott elections so long as their champion is out of the country.

In an interview with AFP, Affi N'Guessan brushed aside the hardliners, declaring the party would field a candidate in the October elections, "either with or without the GOR."

If Gbagbo cannot take part, "I certainly hope to be that person," he said.

After being ousted, Gbagbo was arrested and transferred to the Hague-based International Criminal Court (ICC).

He spent seven years behind bars before being cleared in January 2019 of crimes against humanity for post-electoral violence that claimed 3,000 lives.

He was released under strict conditions, including that he return to court for a prosecution appeal against his acquittal. He is currently in Belgium.

"If (Gbagbo) wants to be head of the party, I am willing to hand over to him and play the role of vice president," said Affi N'Guessan.

"If he is in Ivory Coast and he is eligible, I am willing to join him in the battle.

"But if he is ineligible, he too has to commit to supporting my candidacy... it has to be mutual," he said, adding that he intended to stage a party congress next month to settle the candidacy.

President Alassane Ouattara defeated Gbagbo at the polls in 2010 and then forced him out with French and UN help following a five-month conflict sparked by the incumbent's refusal to step down.

His acquittal by the ICC has sparked huge speculation of a return to Ivory Coast, igniting hopes among hardliners but also fears that the country could tip once more into instability.

"Obviously, he is going to come back... and this is the moment that requires preparation," said Affi N'Guessan, who served as prime minister under Gbagbo between 2000-2003.

"A formula has to be found... which sets down conditions for a peaceful return. The people in power must agree to receiving him."

Gbagbo technically faces being jailed on his return.

He was sentenced in absentia to a 20-year term by an Ivorian court last November for the "looting" of the local branch of the Central Bank of the West African States (BCEAO) during the post-election crisis.

Ouattara was re-elected in a landslide in 2015 over his closest rival, Affi N'Guessan.

He announced in March this year that he would not seek a third term.

The events of 2010-11 had a devastating impact on one of West Africa's most advanced economies, and the political trauma remains profound today.

Tensions are high in the runup to the presidential vote, due in October.

Municipal and regional elections in 2018 were marked by violence and accusations of fraud.

Affi N'Guessan said he remained dissatisfied with the Independent Electoral Commission (CEI) overseeing the presidential ballot but would not boycott the poll.

"Ivory Coast does not need another crisis. There's no question of repeating in 2020 what happened in 2010. We are counting on a sense of patriotism and history for this election to be transparent and for the CEI to give the true result of the ballot box."

The ruling RHDP party in March designated the prime minister, Amadou Gon Coulibaly, who flew to France in early May with heart problems.

The other is from former rebel chief Guillaume Soro, once a Ouattara ally, who lives in self-imposed exile in France.

He faces several court cases in Ivory Coast that could scupper his bid, including a 20-year jail term and loss of civic rights.