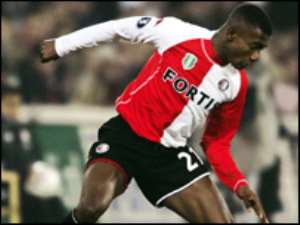 Football great Johan Cruyff has criticised the immigration minister of the Netherlands for the exclusion of Salomon Kalou from their World Cup team.
Writing in the Dutch paper De Telegraaf, Cruyff said Rita Verdonk's decision not to grant the Ivorian-born player citizenship contributed to their early exit from the tournament.

"I don't want to say the minister is to blame for the Dutch team getting knocked out, but she is definitely partly to blame," he said.

Holland were knocked out in the second round, losing 1-0 to Portugal.

"As a result, Holland were put in a situation that if Arjen Robben and Robin van Persie were not playing well, there was no alternative," Cruyff said.

"Salomon Kalou would have given us one."

Cruyff, star of the 1974 World Cup side, went as far as accusing Verdonk of acting against the country's interests.

"Anybody who watched the World Cup and saw the effect it had on the country can't convince me that (granting Kalou citizenship) would not have been in the national interest," Cruyff said.

Diabetics, Hypertension Are Associated With Covid-19 Deaths ...
7 hours ago