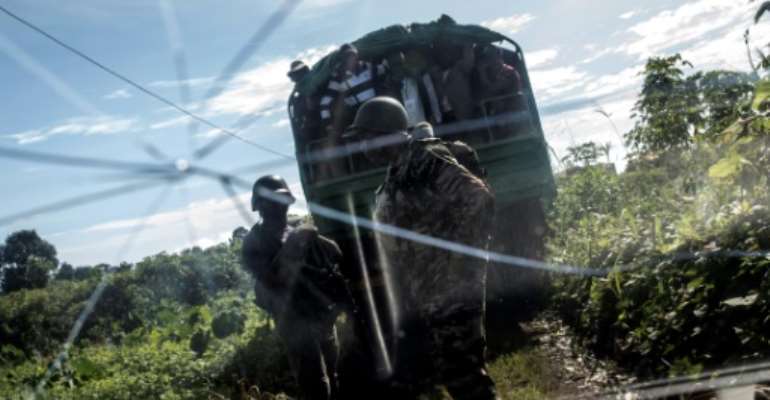 Cameroon soldiers have been fighting against anglophone separatists. By MARCO LONGARI (AFP)

Three soldiers have been charged with murder over a massacre in western Cameroon, where security forces are fighting anglophone separatists, the army said Thursday.

At least 10 children and three women were killed on February 14 in the village of Ngarbuh, according to the authorities.

"The three Cameroonian soldiers have been placed in provisional detention in Yaounde military prison," army spokesman Colonel Cyrille Atonfack Guemo told AFP, adding that they had been charged with murder.

The military initially denied any killings and said the deaths had resulted from an "unfortunate accident" which happened when fuel containers exploded in crossfire between separatists and troops.

The UN said at least 23 civilians had died, 15 of them children and two of them pregnant women.

The preliminary conclusions, published in mid-April, found that three "uncontrolled" soldiers who had disobeyed orders killed 10 children and three women with the help of local auxiliaries from the Fulani, or Peul, ethnic group.

The troops then "tried to hide the facts by setting fires" before submitting a bogus report, according to the probe.

In addition to being charged with the murder, the three -- two troopers and a sergeant -- are also accused of disobeying orders, destruction of property and arson, the army said on Thursday.

Cameroon's English-speaking regions and their capitals. By Valentina BRESCHI (AFP)

Human Rights Watch (HRW) said on Thursday that it was glad that the investigation had got underway.

"However, we believe that all those who are responsible for these odious crimes, including those at the top of the chain of command, should be held accountable and punished appropriately," she said.

In its own probe, the rights watchdog said between 10 and 15 troops took part in the massacre, including members of an elite unit, the Fast Intervention Battalion (BIR).

The deaths triggered an outpouring of grief in Cameroon, and Richard Bona, a Cameroon-born US bass player, devoted a song to the victims called "Ngarbuh."

The massacre took place in the Northwest Region, which with the neighbouring Southwest Region was once part of British colonies in West Africa called the Southern Cameroons.

They joined French-speaking Cameroon after it gained independence from France in 1960.

Decades of grievances at perceived discrimination by the francophone majority brewed into a declaration of independence in October 2017, which was followed by a government crackdown.

The self-declared state is called the Federal Republic of Ambazonia, named after Ambas Bay in southwestern Cameroon.

The declaration has not been recognised internationally and Biya has refused demands to return to a federal system.

Although rights monitors emphasise that abuses have been committed by both sides, the armed forces have become mired in a series of high-profile atrocities.

On June 5, again in response to international pressure, the military confirmed that Samuel Wazizi, an anglophone TV journalist in the Southwest Region's capital of Buea, had died in custody after being detained last August.

The army said he had worked for the separatists and died of "severe sepsis." The National Union of Cameroon Journalists described the statement as a "tissue of lies" and said the 35-year-old had been tortured.

The army has also been accused of violations in Cameroon's Far North, a region abutting Nigeria where Boko Haram jihadists fighters have carried out brutal attacks on civilians.

Seven soldiers are on trial for the execution-style killing of two women and their babies in 2015 -- an atrocity that was filmed and shared on social media.

The government had initially dismissed the images as fake before changing position and arresting the seven.

Komenda Sugar factory to be operational in 2022 — Akufo-Addo...
16 minutes ago

MMDCEs confirmation: Henry Quartey is a master tactician, I ...
16 minutes ago