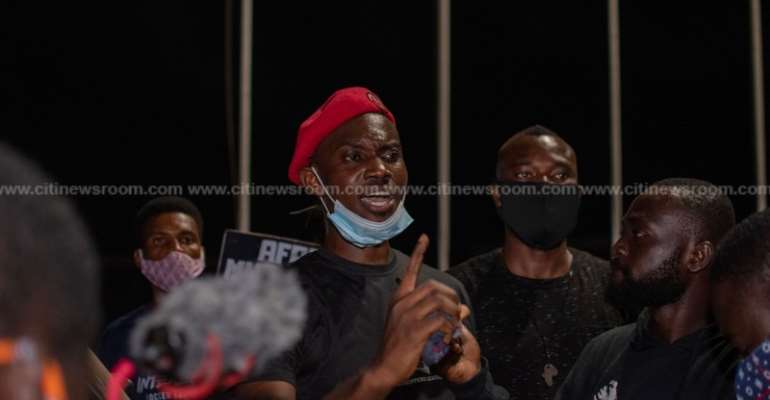 Ernesto Yeboah, the convenor of the Economic Fighters League, has been granted a bail in the sum of GHS100,000.

He was arrested on June 6 at a Black Lives Matter vigil held in Accra last Saturday and has been charged for failing to notify the Police about the vigil and breaching restrictions imposed on public gatherings.

Mr. Yeboah pleaded not guilty and the court granted him the bail with three sureties; two of whom are to be public servants.

He has maintained his innocence in the matter and insisted in an interview on The Point of View on Citi TV that the gathering was lawful.

“The charges were that I did not notify the Police which was a lie and that the E.I was also breached which was also false. Before anyone entered the space, we were hand sanitized, our ushers were there to do that and if you came without a mask, you will be given one.”

He also criticised his treatment by police saying he “sat for 14 hours throughout the night” at the Police Station, following his arrest.

“The Police officers tried as much as possible not to make things difficult for me. Nobody questioned me. It was in the morning that charges were pressed [against me].”

Mr. Yeboah also said he has “no regrets for holding the vigil because the group did nothing wrong.”

“All we did was to follow laid down procedure and it is not new to us. It is something we have been doing. If there is any dishonesty that we have been pointing at it is what you are seeing now, that the state and the Police all coming down to clamp down on good people.”

“This is not an Ernesto Yeboah versus the state case. It is the people versus the system,” he stated.