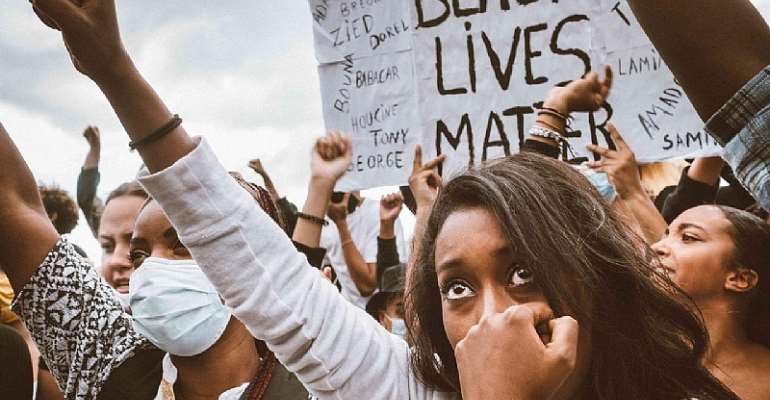 “Any man's death diminishes me, because I am involved in mankind; and, therefore, never send to know for whom the bell tolls; it tolls for thee.” - John Donne: “No Man is an Island”

African slaves were captured and sold to Europeans: Portuguese, Spanish, French, British. As Elikia M'bokolo puts it: “The African continent was bled of its human resources via all possible routes… the Red Sea … Indian Ocean… The Atlantic”. They were put in chains by their necks and their legs were shackled. They were put in ships, packed like sardines. They were branded with hot iron for identification. They were sold like cargo (goods), the sale being advertised: “July 24th 1769. To be sold… A cargo of ninety- four prime, healthy Negroes, consisting of thirty-nine men, fifteen boys, twenty-four women, and sixteen girls. Just arrived…” They worked 20 hours of the 24 hours a day – in sugar, cotton and tobacco plantations. Some worked as domestic servants, artisans, sailors, bakers, barbers, carpenters, ship builders, weavers – menial but spine-breaking jobs, and whipped incessantly by white supervisors.

Then, fortunes changed. Writers advocated abolition. William Cowper wrote in 1785 on 'The Task': “… Slaves cannot breathe in England; if their lungs receive our air, that moment, They are free, They touch our country and their shackles fall…” The Abolitionists emerged. By Slavery Abolition Act (1833), the British Parliament abolished slavery throughout the British Empire. Britain elected itself to be the global policeman. Britain paid £20 million in compensation, but whatever penny was paid went to the slave owners, nothing to the enslaved. Besides, no property, landed or otherwise, went to the enslaved. Granville Sharp, Thomas Clarkson, William Wilberforce were notable leaders among the Abolitionists. In 1862, U.S. President Abraham Lincoln proclaimed the emancipation of slaves and the 13th Amendment of the U.S. Constitution in 1865 banned slavery. Beecher Stowe, John Brown, Angelina Grimble championed the anti-slavery campaign.

Who can deny that British and U.S. wealth was built on the slave trade – the plantations in the Carribeans. Between 1698 and 1807, Bristol had over 2,100 ships that transported human cargo from Africa to the West Indies. And Edward Colston was champion here; he became a hero in Bristol for bequeathing his wealth to charities. Forgetting the 'blood money' earned from the inhuman treatment of African slaves, he was immortalised by statues, as well as having his name on streets and buildings.

Descendants of these slaves cannot economically challenge their white counterparts; psychologically, they are at pains to recall their past history; it is difficult to rise up mentally above inferiority complex; they are associated with crimes, and a disproportionate number of them are in prison; comparatively their educational opportunities lag behind that of whites. The black descendants were discriminated against even in schools, beaches and buses – the best places and seats were reserved for 'whites' and Rosa Parks, the 'First Lady of Civil Rights' led the 'Montgomery bus boycott', after refusing to relinquish her seat in the 'coloured' section of a bus because the 'whites only' section had been full. She received death threats for years.

Martin Luther King Jnr is noted for his contributions to the American civil rights movement in the 1960s. In 1963, he delivered a speech: 'I Have A Dream' in which he spoke of a time when United States would banish segregation and racism. His approach was non-violent. When Barack Obama, whose mother was white and whose father was black (Kenyan) became the 44th President of the United States between 2009 and 2017, black Americans thought that the end of injustice and racism had come. But discrimination, unjust treatment, racism continued. Obama sees the demonstrations as powerful and transformative

The asphyxiation of George Floyd by police officers was as episodic as it was grim. How could a human being, called Chauvin, a Minneapolis police officer be so cruel as to refuse to heed a cry 'I can't breathe'? It was history in the making. Just as Rodney Floyd, George's brother remarked: “Everybody is going to remember him around the world. He is going to change the world”.

Joe Biden, the presidential candidate of the Democratic Party thinks: “No child should have to ask questions that too many black children have to had to ask for generations: why? Now is the time for racial justice. That is the answer we must give to our children when they ask why?”

George Floyd had wanted to become a judge and make an impact on justice. As revealed by his grade-two school teacher, Waynel Sexton who had kept eight-year-old George's essay with the topic: 'Future Famous American', he had written: “When I grow up, I want to be a Supreme Court judge, when people say 'Your honour, he did rob the bank', I will say 'Be seated'. And if he doesn't, I will tell the guard to take him out. Then I will beat my hammer on the desk. Then everybody will be quiet…”

Floyd's death has sparked public protests and demonstrations all over U.S.A. and worldwide. Floyd's name has been mounted in the Sankofa Wall in the WEB Dubois Centre in Accra. There have been peaceful protests in Kenya, Nigeria, Liberia, Senegal, South Africa and Tunisia. In Asia, Armenia, China Cyprus, Georgia, India, Iran, Israel, Japan, Pakistan, Palestine, Philippines, Thailand South Korea, Turkey. In Europe, the big cities in Austria, Belgium, Bulgaria, Czech Republic, Denmark, Finland, France (Paris demonstrators were also remembering the death of Adama Traore who died in police custody) Germany, Greece, Hungary, Ireland, Italy, Kosovo, Netherlands, Norway, Poland, Portugal. In Bristol in the UK, the protestors tore down the statue of Edward Colston and dumped it into the sea. In North America, there were protests in Canada, Mexico, the Carribean and Oceania, the protestors were in Australia and New Zealand. It was the same in South America: Argentina, Brazil…

In New York, a police officer pushed down 75-year-old Martin Gugino who hit his head on the tarred road. The police failed to attend to him. Mayor Cuomo remarked: “You can see that video and it disturbs your basic sense of decency and humanity. Why? Why?… Where was the threat? … you see blood coming and police officers walked by. It's just fundamentally offensive and frightening…” President Donald Trump, as his custom is, could not hide his sadistic posture: “The Buffalo protestor shoved by the police could be an ANTIFA provocateur. 75-year-old Martin Gugino was pushed away after appearing to scan police communication in order to black out the equipment… it could be a set up?”

Besides the tearing down of Edward Colston statue in Bristol, a protestor wrote on Winston Churchill's statue: 'Churchill was a racist'. And a rally in Oxford called for the removal of Cecil Rhodes' statue and that of slave-holder Robert Milligan was removed voluntarily from outside the museum of London Docklands after Mayor Sadiq Khan announced that “… any links to slavery should be taken down.” The fate of the statue of King Leopold of Belgium can be predicted.

'Black Lives Matter' is surely a slogan that expresses the concerns of black people. 'All Lives Matter' may invalidate the specific suffering of African-Americans and may not attract a large audience, but mankind needs that. Whatever slogan is adopted, George Floyd's death is a breaking point, a rallying point for mankind to go deep into our history, and… we (humanity) shall overcome.