Boki: Justice For Victims Of Witch-hunt 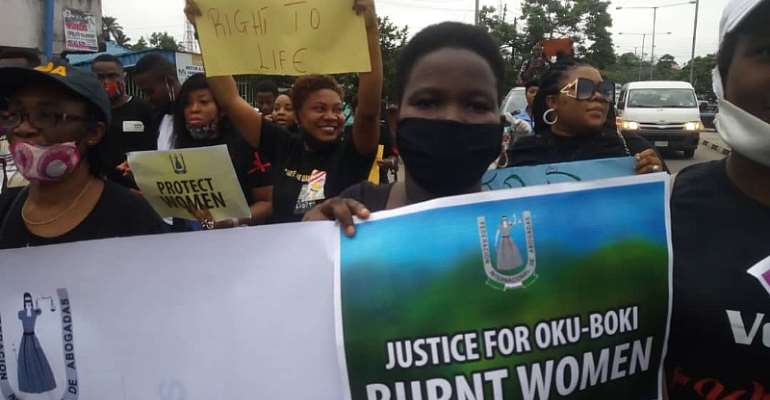 A protest has been staged in Calabar to get authorities to take action against those who attacked and burnt alleged witches in Boki LGA in Cross River State. The protesters carried placards with the inscription: Justice for Oku-Boki Burnt Women. Last month, an aide to the state governor led local thugs to attack and set ablaze suspected witches in Oku Community. The police have yet to arrest Thomas Obi Tawo (aka General Iron) and other alleged perpetrators of this horrific crime. Victims have yet to receive any support or assistance from the state government.

Meanwhile, the Advocacy for Alleged Witches (AfAW) has received a list of victims of the witch-hunt. Here are their names:

There were fifteen victims and the name and identity of the fifteenth person has not been confirmed.

An eyewitness told AFAW that on that fateful Thomas Obi Tawo arrived the community with his boys. First, he attacked his mother, Rose Obi, and then Chief Benard Kekong. General Iron called out names of other suspected witches. His boys dragged them out of their apartments, beat them up, and throw them into the fire. People could not cry out or raise an alarm. Nobody tried to stop or resist them because they feared that they could also be beaten and thrown into the fire.

Three persons who were set ablaze have died as a result of their wounds. They are Benard Kekong, Rita Abang, and Margaret Akan. Other victims are various hospitals battling for their lives. Some of the victims who could not afford the cost of medical treatment are at home. The buttocks of one of the victims, Serah Kepua Odu was completely burnt. She cannot sit down. Another victim, Sussana Bisong, sustained serious injuries. She was unable to go to the hospital because she could not afford the hospital bills. A local source told AFAW that the wounds started smelling and they had to rush her to a general hospital in Ogoja. AFAW urges the government of Cross River state to support the medical treatment of those affected by this tragic incident and help rehabilitate victims of witch hunts in Boki LGA.