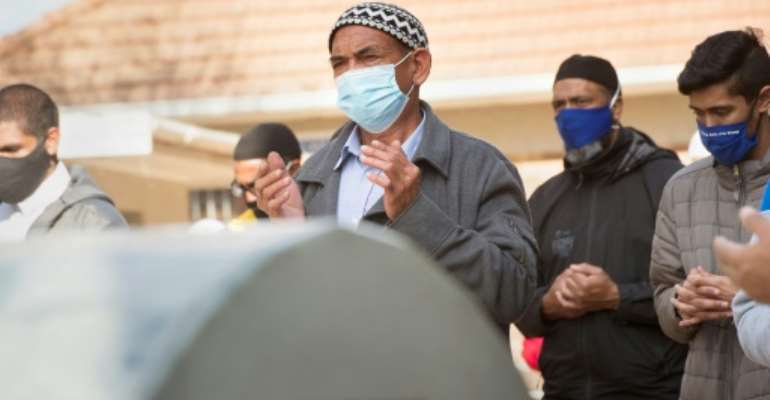 Risk of catching the disease has prevented the city's Muslim community from burying their dead in line with Islamic tradition. By RODGER BOSCH (AFP)

Like Muslims across the world, South African Esa Alexander could not pray by his father-in-law's hospital bed or customarily wash and shroud the body after he succumbed to COVID-19 last week.

"We could see the body but it was wrapped in plastic so we couldn't touch him," said Alexander, 52, a photographer in South Africa's coastal city of Cape Town. 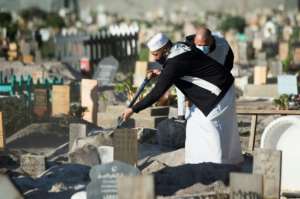 Cape Town's Western Cape province has recorded over 65 percent of South Africa's 52,991 coronavirus cases and more than three-quarters of its 1,162 deaths. By RODGER BOSCH (AFP)

Cape Town's Western Cape province has recorded over 65 percent of South Africa's 52,991 coronavirus cases and more than three-quarters of its 1,162 deaths.

Risk of catching the disease has prevented the city's Muslim community from burying their dead in line with Islamic tradition.

"We couldn't kiss him on his forehead," Alexander recalled, dismayed at the thought of the 79-year-old spending his last moments alone in hospital. 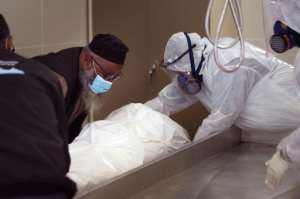 Family members are unable to carry out rituals according to Islamic tradition. By RODGER BOSCH (AFP)

"There was no one there to hold his hand," he told AFP. "Maybe he wanted to say something to the family."

Undertaker Ebriham Solomon said bodies had to be wrapped in a double layer of plastic, which he said could be quite upsetting for mourning family members.

Relatives also had to don face masks, gloves and aprons to lower the body into the ground.

Most had not been able to physically accompany their loved ones through their final days. 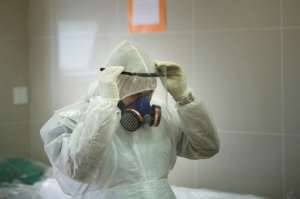 "I did a funeral... of a family whose father went into hospital eight weeks prior to his demise," Solomon said.

"The only contact they had... was via telephone or video call. Then he died (and) the real send off or goodbye wasn't really there."

The undertaker admitted he did not have the heart to charge funeral-goers for the "costly" personal protective equipment (PPE) provided to mourners.

"We can't burden the family with extra costs," Solomon said. "A normal funeral is already costly." 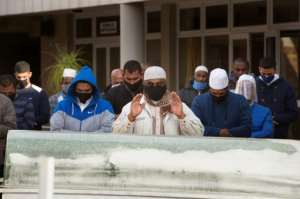 Family members cannot pray at the bedside of relatives or wash and shroud their bodies. By RODGER BOSCH (AFP)

"No washing was done on the body which was really sad and upsetting because in our religion that's one of the last rites we need to do," the 27-year-old said.

She regretted not being able to see her grandfather's body before he was buried by funeral workers rather than family, which she also found distressing.

"Nobody was allowed to get that closure," Richards said.

"When they were done putting the body in the hole what I found very disturbing is that they disposed of their PPE wear alongside the body," she added. "That is dishonouring our dead."