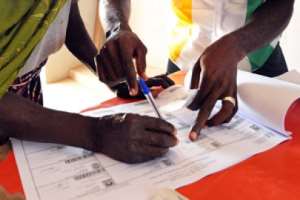 Humble greetings, Agyaaku. Kindly grab your well-maintained stool. Please don’t forget your water, Nana. We are going to continue with the voter register discourse. Oh yes, Puppet Master was a good listen last time, as it always is. You giggled, I can sense. That is a consistent feature of yours: fondness for music that speak to issues.

That reminds me, Agyaaku. We were talking about consistencies in the views held by the major stakeholders on the new voter register.

Nana, you will recall the EC in July 2016 released a list containing details of all the 56,772 persons who used NHIS cards to register in 2012. By July 30, 2016, the EC said 24,287 (42.78%) out of the 56,772 NHIS cards registrants, whose names were deleted from the voter register, had been re-registered. However, these figures became debatable when some people alleged that they registered with the NHIS card but their names are still on the register after the deletion exercise. Notable was Sydney Casely-Hayford, a political commentator. It was admitted by then EC chairperson that some registrants using NHIS card might still be on the register, and that she thought the number would be more than 56,000.

Without a new voters register, the 2016 elections came by, Agyaaku. With a turnout of 68.62% voters, the EC pronounced Nana Akufo-Addo the winner, with 53.85% of the votes against Mr Mahama’s 44.40%. That was a victory for the opposition NPP against the incumbent NDC then, from an unhealthy voter register. But the NPP still sees the need to undertake a new voter register even though they won with the 2012 voter register. And the NDC still thinks the 2012 voter register should not be replaced with a new one even though they lost with it. That is another level of consistency, is it not?

In July 2018, the EC leadership got changed again as a result of avoidable, self-inflicting and confidence-eroding machinations and banters between mainly the commissioners. Their mandate was thus quashed through the Chief Justice’s committee set to investigate the commissioners.

The new EC has stated that the current Biometric Verification System (BVS) is not fit for running an election, ideally. That is a re-echo of the same not-fit for purpose belief held by all stakeholders since the 2013 Supreme Court ruling. The current EC has enumerated a litany of reasons, including the inability to upgrade software of the BVS, which is corroborated by the manufacturers, Nana. To them, Agyaaku, the BVS as it is now will not help the Commission in efficiently discharging the electoral duty assigned to them. So Agyaaku, do we allow them to go ahead and compile a register anew, or we disallow them in that quest, hoping the not-fit-for-purpose system will birth us acceptable election results?

There is still the dichotomy about the new voter register till date, Agyaaku. A part thinks that the register should be compiled anew; another part thinks the register should remain as it is, except for some cleaning out of illegitimate registrants. As you are aware, several statements have been made to buttress these dichotomic standpoints. The NPP, through its assigns, have been calling for compilation of new voter register. The NDC, through its rank and file, are also calling for no new register. Both are being consistent. However, there have been some threats issued. Demonstrations have been organised by the opposition currently, just as it happened in 2016. That is admissible by our laws. Mr Mahama is reported by peacefmonline.com to have said “the EC should tread cautiously. They shouldn’t do something that will bring confusion and chaos in this country. If they don’t want to listen to us and continue with the new registration then, whatever will happen, they have to bear the consequences.” A man of God made similar statements. That seems threatening, Nana. Is such admissible by our laws, Nana? Is it wrong for the EC to also listen to, and adopt the other view? Agyaaku, I am trying to marry Mr Mahama’s current statement with what he said in 2015 and 2016 about the independence of the EC, how demonstrations affect the countries democratic credentials and the EC’s liberty to decide what is best for the country.

Well, the level of consistency of both parties can be measured from their acceptance of the independence and liberty of the EC, Agyaaku. That is, can the same consistency be deduced from the parties in acknowledging, accepting and allowing the EC to discharge its mandate independently and ad libitum, so long as it does not breach the laws of the land? We can perhaps be helped in this judgement by subjecting consistency of each school of thought on the voter register based on Mr Mahama’s two prominent pronouncements stated above, Nana. One was made when he was president and the other in his current position as opposition leader. To this end, Agyaaku, I will leave it to you to judge. Please, refill your much-adored cold water as you ponder over the inconsistency in these consistencies. And don’t worry Dube’s Mickey Mouse Freedom is on replay here, Nana.