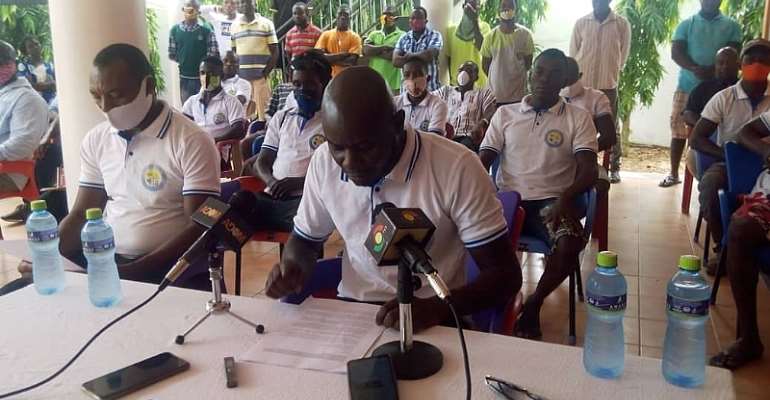 Harrison Noye Quarshie, Assistant Secretary of the Youth Association (with the microphone) addressing the press

The youth of Appolonia in the Kpone-Katamanso constituency of the Greater Accra Region have called on the Kpone Traditional Council (KTC) to start the process of destoolment of the Chief of the town.

According to the youth, not only has Nii Nuertey Amobi II showed gross disrespect to the Paramount Chief and President of the Kpone Traditional Council, Nii Tetteh Otu II, but most importantly gone contrary to the provisions of the Chieftaincy Act.

“We, the youth of Appolonia are calling on the Kpone Traditional Council to commence the process of destoolment of Nii Nuertey Amobi II because he has virtually gone contrary to the provisions of the Chieftaincy Act for the last two years”.

Speaking at a press conference held by the youth at the Appolonia in the Kpone-Katamanso constituency, Harrison Noye Quarshie, Assistant Secretary of the youth, yesterday said it is time the Chief is destooled for a new person to take over.

Harrison Noye Quarshie continued; “Nii Nuertey Amobi II, soon after his installation as Chief of Appolonia teamed up with a group of people who fiercely opposed him and the kingmakers, an issue we still cannot fathom. We keep asking ourselves how and why events have turned up this way.

“This same group of people held a press conference and told the whole world that they do not recognize him as the legitimate Chief of Appolonia simply because he is the son of a linguist. It did not end there; they prevented him from entering the St. Stephen Methodist Church, Appolonia where he intended to hold a thanksgiving service after his installation”.

Mr. Quarshie intimated: “As if that was not enough, the group, under the impression that one of the signs that show that a Chief has been destooled is when his sandals or ‘Ahenema’ is removed from under his feet, brought some young men suspected to be land guards into the town, and ordered them to remove one of the sandals from under the feet of our Chief to signify his destoolment.

“These land guards during the process fired gun shots into the air thus scaring residents in Appolonia and causing several other people to run for their dear lives. Soon after the incidents, some of his detractors went on Oman FM, a Madina based radio station to declare war against him with threats of death.

"Overwhelmed by activities of the land guards, their assigns and cohorts, coupled with the absence of the Chief to stamp his authority over issues in the Community, members of the Appolonia Stool Council and the Appolonia Youth Development Association lodged a complaint with the Paramount Chief of the Kpone Traditional Area, Nii Tetteh Otu II, for immediate redress.

"Nii Amobi II was invited by the Paramount Chief of the Kpone Traditional Area, Nii Tetteh Otu II and warned him to return to Appolonia to do his work as the Chief of Appolonia, for whatever reason, Nii Amobi II didn’t care about the advice," Mr. Quarshie noted.

According to him, since his mysterious departure from the town, both members of the Appolonia Stool Council and the Appolonia Youth Development Association have spent time and resources combing the nook and cranny of the Kpone-Katamanso Municipality in search of the Chief, but all to no avail.

He stressed: “it is the desire of natives and residents of Appolonia alike, that our Chief emerges from his hideout and return to the town to continue with his duties as Chief and steer affairs of our beloved Appolonia towards the right direction to ensure the development and wellbeing of the youth in the Community.

“As a result of his absence from his duties, running the affairs of the Stool has become a task as Herculean as taming a lion and also making it difficult for the Stool to fight its cases in court because Nii Nuertey Amobi II has rejected summons documents, which are to be endorsed by him”.

Mr. Quarshie explained: "Another area of concern is that as a result of his absence from duties, groups of people and individuals who pose as land guards have enough room to operate, grabbing Appolonia Stool lands, and releasing or alienating same indiscriminately, not forgetting their atrocious acts of terrorizing the indigenes, attacking them on their way to their farms.

"We are calling on all members of the Appolonia Youth Development Association and all well-meaning natives or residents to put their shoulders to the wheel to help SAVE our beloved town before all our lands are taken away from us by unlawful and greedy people."

When contacted for his side of the story, the Spokesman for Nii Amobi II, Asafoatse Nii Odiasempa said the Chief has no comment because, the case was sent to the Judicial Committee of the Kpone Traditional Council and also the Human Rights Court in Accra and still pending.

“We don’t want to say anything for now. At the appropriate time we shall state our position,” Asafoatse Nii Odiasempa emphasised.