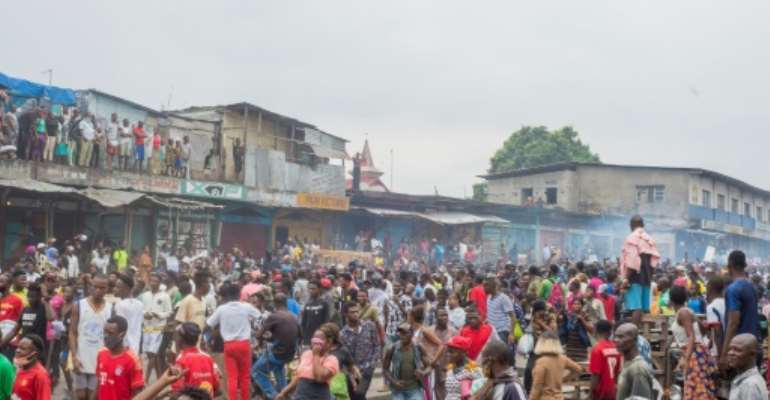 Hundreds of protesters gathered to demand the reopening of the Kinshasa market. By ARSENE MPIANA (AFP)

At least three people died during a protest by hundreds of demonstrators in the DR Congo capital against the coronavirus lockdown closure of the city's main market, officials and witnesses said.

Police said they fired warning shots to disperse the protesters who gathered at the site on Tuesday to demand the reopening of the Kinshasa market, AFP reporters said.

Several of the demonstrators said at least one person was killed by gunfire.

A spokesman for the Kinshasa provincial government said two people were electrocuted while another was crushed to death by the fleeing crowd after "trouble by people pretending to be trade unionists" from the market.

"We deplore the deaths of three people," the spokesman, Charles Mbuta Muntu, said following a meeting to discuss the unrest. 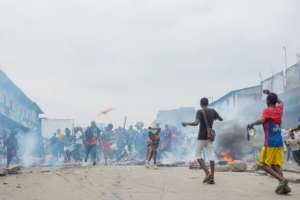 The demonstrators blocked a road with barricades at the Kinshasa Grand market. By ARSENE MPIANA (AFP)

"Those responsible for these riots have been arrested" for having violated state of emergency measures imposed to combat the virus.

Demonstrators had stood their ground behind barriers that have since early April cut off the Gombe area housing the market as part of the fight against the spread of the coronavirus.

The protesters hurled insults at the Kinshasa governor, Gentiny Ngobila, calling him a "thief."

Belise Okonda, a governorate spokesperson, denied rumours the market was being knocked down.

In a letter seen by AFP, Interior Minister Gilbert Kankonde ordered Ngobila to reopen the market.

However, the governor first wants work undertaken by the city authorities to improve health and sanitation at the market.

The Democratic Republic of Congo has suffered 90 deaths from the new coronavirus from 4,359 cases, including 3,864 in Kinshasa. 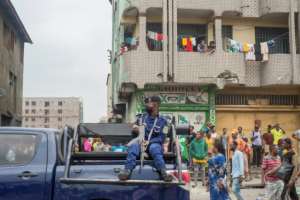 DRC President Felix Tshisekedi ordered the state of emergency on March 24, which has been extended several times by a vote in parliament.

Under the measure, borders, schools, places of worship, bars and restaurants are all closed, and gatherings of more than 20 people are banned.