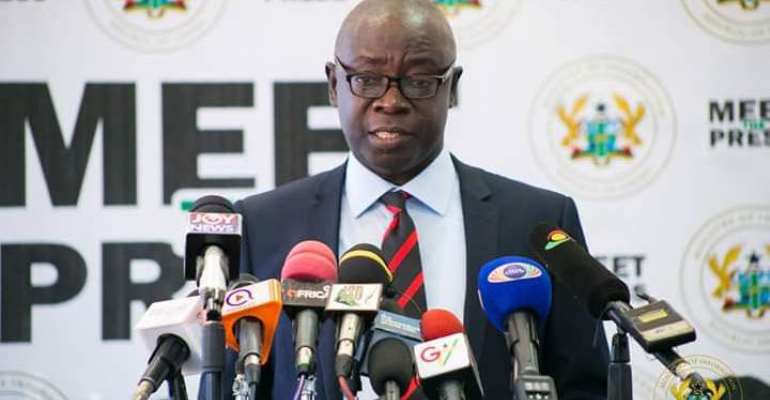 Minister of Lands and Natural Resources, Kwaku Asomah-Cheremeh, has threatened to initiate a punitive action against the District Chief Executive of Suaman, Christian Baah, and the District Police Commander, Theophilus Boateng over their alleged underhand dealings in illegal mining activities.

That, according to him, is because the DCE and the police commander conspicuously failed to ensure the protection of some nine excavators seized from illegal miners in the area.

The Minister told the press at an illegal mining site located at Tugakrom in the Suaman District on Tuesday, June 9, 2020, that, sometime in March this year, he led a team of 32 police officers and some security operatives to confiscate nine excavators from illegal miners in the area.

He said the excavators were placed in the custody of the DCE and the Police Commander for Suaman.

According to him, after some days, he returned to the area with some 10 soldiers.

Upon return, he stated, there were police officers with AK47 guarding the excavators.

However, he said major parts were missing on the excavators, making it impossible for them to transport them from Suaman.

He disclosed that at the material time of the seizures of the machines, they were all working.

Interestingly, when the Minister returned to Suaman on Tuesday, June 9, 2020, eight of the seized excavators were on illegal mining sites at Tugakrom.

Mr Asomah-Cheremah wondered how the excavators moved from the custody of the DCE and the Police Commander to the bush for illegal mining.

He says at the next national security meeting on June 17 or next cabinet meeting, he will raise the matter to President Nana Akufo-Addo for disciplinary action to be taken against the DCE and the police chief.

The minister expressed lack of trust in the DCE.

Mr Asomah-Cheremeh visibly upset upon realizing that about 100 acres of land at Tugakrom have been destroyed by the illegal miners who are believed to be Chinese.

A number of mining equipment at some of the sites visited were burnt by national security operatives as the Minister vowed to crackdown on illegal activities in the sector.

He encouraged Ghanaians who are desirous of mining to apply for small scale license instead of conspiring with foreigners to engage in illegal activities.