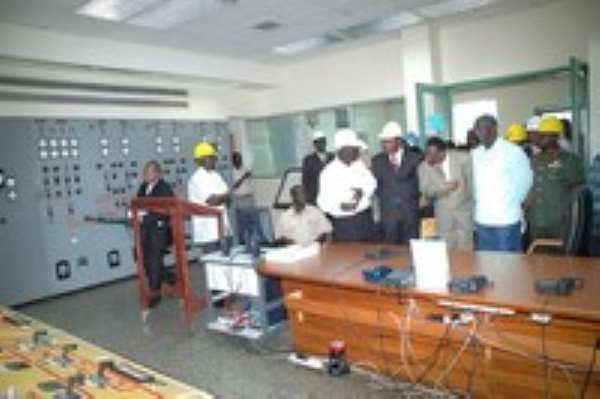 President J.A. Kufuor has called on governments in the West African sub-region to endeavour to reduce the delays at the various borders that impede trade and business among countries.

He noted that the trade and development of the countries' economies in the sub-region would be improved significantly if the delays at the borders were minimized.

President Kufuor was speaking at the departure ceremony of the President of Benin, Dr. Yayi Boni at the Kotoka International Airport on Saturday.

President Boni paid a two-day official visit to the country.

However, he said as the borders and the economies of the countries are opened for business, he said, governments should also be security conscious in order not to inadvertently allow infiltrators to destabilize the country.

The President noted that though the sub-region is made up of Anglophone and Francophone countries, “we should go beyond the language barrier and improve upon trade among our nations”.

He commended President Boni for winning his country's presidential elections as an independent candidate.

He said Benin would be a great country if President Boni is able to translate his ideas and visions into reality.

President Boni suggested that Ghana, Togo, Benin and Nigeria should endeavour to form the pivot for the sub-region's development.

He said though the visit was short, it was full of engagements and afforded him the opportunity to learn a lot from his Ghanaian counterpart.

President Boni stressed the need for the two countries to continue to exchange ideas for their mutual benefit.

In a communiquй issued at the end of the visit, the two leaders affirmed their commitment to the common objective of fostering the closest possible cooperation between their countries and peoples towards the attainment of better political understanding and peaceful co-existence.

The communiquй was signed by the Deputy Minister of Foreign Affairs, Regional Cooperation and NEPAD, Akwasi Osei-Adjei and Albert Agossou, Benin's Minister of State in charge of African Integration.

The two leaders, according to the communiquй, also expressed their desire to collaborate to create conditions for the accelerated development of their countries through joint projects.

They welcomed the efforts being made to consolidate peace and democracy in Sierra Leone and Liberia and called on the international community to support the process with more resources.

They also called for an early resolution of the crisis in Guinea Bissau, Sudan, Somalia, the Great Lakes Region and the Democratic Republic of Congo.

The Heads of State reaffirmed their faith in the restructuring of the reforms of the United Nations in order to ensure equity and fairness in the international system.

Earlier, in the morning, the two leaders toured the Akosombo Dam site where they were conducted round the facility by Kirk Coffie, Director of Generation at the Volta River Authority.

**President Kufuor and President Yayi Boni being briefed on the operations of the Akosombo Hydro Electric Dam at the control room by Mr. Kirk Coffi, Director of Generation of the Volta River Authority.