By Barbara Tiedeu - The Conversation 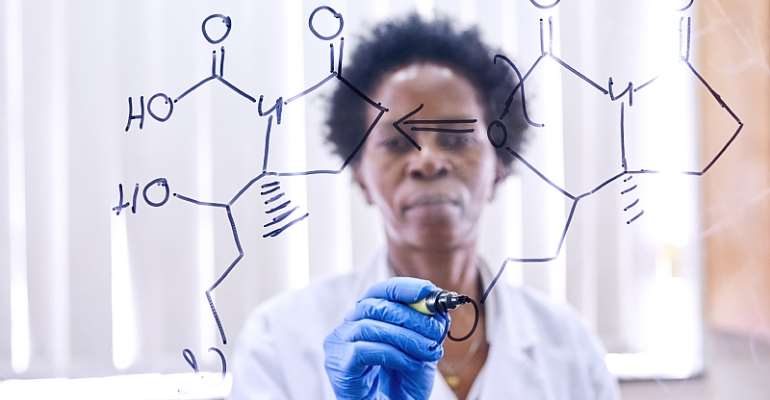 Getting more women involved in science is good for everyone. - Source: Stock photo/Getty Images

Women scientists have a vital part to play in scientific leadership and in contributing to Africa's development and transformation. But they remain substantially under-represented in higher education and in science, technology, engineering , and mathematics (STEM). This is because women are generally seen and treated by society as being inferior and less capable than men. This then spills over into their educational and professional lives.

This is a global issue. Women account for 53% of the world's bachelor's and master's degree graduates and 43% of PhD graduates. But they make up only 28% of researchers in all fields. And, only 30% of women in higher education move into STEM-related fields.

The situation is no different in sub-Saharan Africa; in fact, in some countries in the region it's worse. Only 30% of sub-Saharan researchers in all subject areas are women.

Happily, there have been some improvements in recent years. Between 2011 and 2013, for instance, there was an increase in the percentage of women researchers in South Africa, Egypt, Morocco, Senegal, Nigeria, Rwanda, Cameroon and Ethiopia.

But it isn't all good news. Many women leave scientific research careers at a fairly junior level. Gender disparities persist in the scientific workforce, largely leaving women scientists in junior positions with little responsibility and power to make decisions, as well as limited leadership opportunities.

The result is that scientific work is missing women's perspectives and contributions. This weakens the science agenda. But examples are emerging of how to close the gender gap in African STEM.

The UNESCO STEM And Gender Advancement (SAGA) project is one. It keeps track of gender data and supports the design and implementation of science, technology, and innovation policy instruments that affect gender equality.

To track and monitor women's representation, the African Development Bank's gender equality index captures progress on the appointment of women to posts of responsibility. The index shows the legal, social and economic gaps between men and women, giving African leaders the evidence to begin dismantling the barriers that prevent women from fully contributing to the continent's development.

The Boardroom Africa maintains a database of talented women leaders and senior executives, making them easy to find. It also trains, certifies, mentors and prepares women for board membership. The Boardroom Africa helps organisations benefit from diversity by placing women directors and shifting the boardroom gender balance.

The Gender Summit Africa platform provides evidence of when, why, and how biological differences (sex) and sociocultural differences (gender) affect outcomes. Its goal is to make gender equality in research and innovation the norm and a sign of quality. Africa has hosted two Gender Summits: GS5 in South Africa and GS14 in Rwanda.

The recognition of achievements is crucial to driving gender equity. The African Union Kwame Nkrumah Awards for Scientific Excellence Programme honours two outstanding African women scientists from each of Africa's five geographical regions. This programme promotes scientific development, encourages perseverance in research or academic careers, nurtures ambition, and raises the profile of science and technology innovation so that it contributes to Africa's development.

Read more: Want to be a woman in science? Here's advice from those who've gone before

As part of building skills and mentoring the next generation of African scientists, the African Union declared 2015 as the Year of Women's Empowerment and Development Towards Africa Agenda 2063. It also adopted the Science, Technology and Innovation Strategy for Africa 2024 , which examines among other things the role women can play in accelerating Africa's transition to an innovation-led, knowledge-based economy which meets society's needs.

Convened events that aimed to amplify the voices and concerns of African women and girls have included UN sessions of the Commission on the Status of Women and the International Conference on Population and Development.

Mentorship programmes such as COACh-Cameroon and the Higher Institute for Growth in Health Research for Women ( HIGHER Women ) Consortium have trained hundreds of women in career-building scientific skills, such as applying for grants, leadership, ethics, research quality, and project management. Individually and through workshops, mentors provide professional guidance on dealing with African traditional, societal, and cultural pressures on women.

Annual evaluations show empowerment and improved assertiveness and self-confidence among participants, resulting in an upsurge in their careers. For example, they have been able to get research grants, attend conferences, publish more scientific articles, and achieve promotion.

All these efforts can contribute to closing the gender equity gap in STEM in Africa. But change is needed in other spheres too. Many women in research have to balance their careers with family responsibilities. A strong family support system has been key to the success of many women.

Africa's ability to harness scientific and technological knowledge is crucial for its socioeconomic development and competitiveness. This potential cannot be fully realised without the inclusion and advancement of women.

Barbara Tiedeu does not work for, consult, own shares in or receive funding from any company or organization that would benefit from this article, and has disclosed no relevant affiliations beyond their academic appointment.

By Barbara Tiedeu, Associate Professor of Biochemistry, University of Yaounde 1

Article
Powered By Modern Ghana
J. P. Adjimani Bows Out Of Active Service After 28 Years At University Of Ghana
Why US diplomatic muscle could achieve more in Somalia than drone strikes
Case law suggests South Africa must do more about disrupted schooling
Why the Child's Rights Act still doesn't apply throughout Nigeria
The Ghanaian Presidency: Hype, Burst Myth And/Or Sakawa?
Pasha 81: A closer look at the informal water market in Kenya
How Accra tackled complex challenges in an urban slum
Why South African opposition's policy on racial inequality is out of sync with reality
Mobilizing Decentralized, Participatory Energy Transition In Morocco
COVID-19 Updates Live Dashboard
TOP STORIES