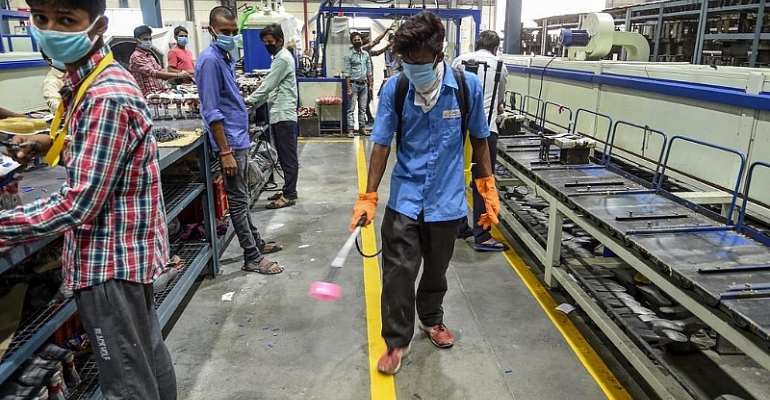 With the Indian government easing lockdown restrictions and allowing businesses, factories and manufacturing to reopen, owners are faced with an acute shortage of workers.

Most establishments have been hit by reverse migration as millions of laborers fled to their far-flung home villages, some uncertain if they will ever return.

In the wake of the nationwide lockdown, as factories and plants got shuttered down, many workers without wages and facing an uncertain future, left for home.

“A majority of our workers are missing. How can we start production when less than a third of the workers are present in the unit? We have no option but to wait for labor to return,” Prateek Lal, a medium scale steel manufacturer told RFI.

The northern city of Ludhiana in Punjab which is renowned for its dominance in the manufacture of hosiery products, knitwear, and textile, is in the throes of a deep crisis.

The industry which comprises over 30,000 hosiery and textile units' employs over a million workers and most of them left during the two-month long lockdown.

“We are in touch with the labor force that has gone back and trying to get them back in trains and in some cases even planes so that the units can be up and running fully,” Gurpreet Singh, a textile manufacturer told RFI.

Economic forecast
The story is true across many sectors that are labor intensive including construction and the service industry which employ gig workers.

In Surat, in western Gujarat, which is the diamond polishing capital of the world , factories have been unable to open because of the scarcity of labor.

According to various estimates there are nearly 100 million migrant workers - nearly a fifth of the labor force and contributing to an estimated 10 percent of GDP - across the nation of 1.3 billion people.

Studies show more than one-fourth migrant workers were unskilled and engaged mainly in construction sector. Another 20 to 25 per cent had no special skills. The migrant workers who specialized in working in automobiles, textile, plastic, iron and cement factories comprised a small chunk of the workforce.

While the trickle of returning migrants is happening, industry leaders, say it will take months for full-scale economic activity to happen as many sectors were bogged down by low demand and falling export.

In the coming weeks and months, the return of migrant labor will pose new challenges for cities. As India opens up economic activity without a Covid vaccine, there is fear that the infection could spread.

The economy is forecast to grow at its slowest pace in 11 years, and analysts are bracing for a severe contraction in the current quarter.

The World Bank  said that the Indian economy will contract by 3.2 per cent in the financial year of 2020-'21 because of the lockdown to control the coronavirus pandemic.