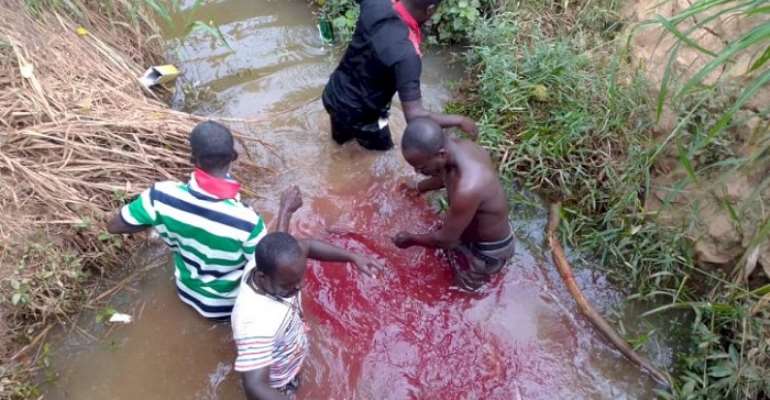 SOME AGGRIEVED executive members of the New Patriotic Party (NPP) in the Juaben Constituency in the Ashanti Region have hurled normality to the dogs and resorted to the use of river deity to seek justice.

Wearing red armed bands to symbolize their fury, the NPP executives allegedly slaughtered a sheep in a river and rained curses on the party leadership for what they perceived as “attempts to protect the incumbent Member of Parliament (MP), Ama Pomaa Boateng.”

According to the aggrieved executive members, the party leadership, in furtherance of the subtle move to ensure that there is no contest, has disqualified one Francis Owusu Achiaw, who has expressed interest to battle it out with the incumbent MP.

In their view, the decision of the party leadership demonstrates unfairness and undemocratic behaviour akin to the character of the opposition National Democratic Congress (NDC).

While slaughtering a white sheep in 'Asuo Abena', the angry-looking NPP executives prayed for “the powerful river goddess at Juaben” to deal with their leaders.

The abnormal incident took place at 'Asuo Abena' at Nobewam, one of the communities in the Juaben Constituency, last Friday. It attracted scores of NPP faithful and sympathizers.

They particularly asked the river deity to deal severely with any party leader that is trying to impose the incumbent MP on the people of Juaben.

The aggrieved executives said they were only seeking a free and fair internal parliamentary poll in the area and added that they would never reverse the curse until their demands were met.

In a related development, other reports indicated that some NPP executives at Offinso had also resorted to similar action by invoking curses on the party leadership in the constituency.

They also took an exception to the disqualification of some parliamentary aspirants ahead of the polls set for Saturday, June 20, 2020.

There have been tensions in some other constituencies in the Ashanti Region after the announcement of the election date.