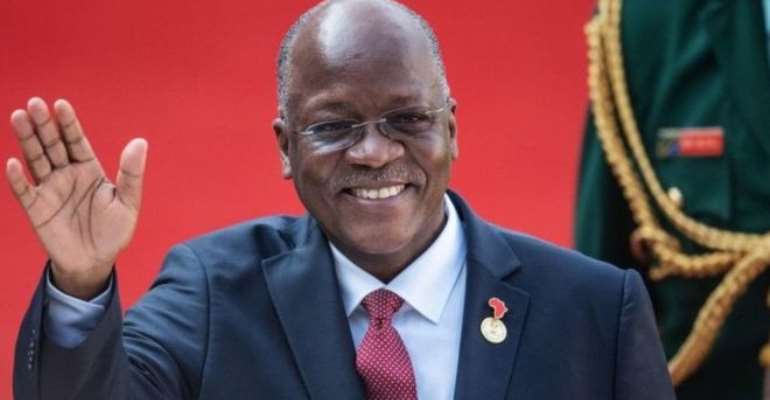 “The corona disease has been eliminated thanks to God,” Mr Magufuli told worshippers in a church in the capital, Dodoma.

The World Health Organization (WHO) has expressed concern over the government’s strategy on Covid-19.

The government has stopped publishing data on the number of coronavirus cases in the country.

On 29 April, the last day official data was released, there were 509 cases, with 21 deaths in Tanzania. However, Mr Magufuli said last week that only four patients were receiving treatment in the largest city, Dar es Salaam.

Last month, Tanzania’s government dismissed a US embassy warning that hospitals in Dar es Salaam were “overwhelmed” and that the chances of contracting the virus was “extremely high”.

Mr Magufuli has repeatedly said the health crisis has been exaggerated and urged people to attend services in churches and mosques, saying that prayers “can vanquish” the virus.

What did Magufuli say?

“I want to thank Tanzanians of all faiths. We have been praying and fasting for God to save us from the pandemic that has afflicted our country and the world. But God has answered us.

“I believe, and I’m certain that many Tanzanians believe, that the corona disease has been eliminated by God,” he told worshippers on Sunday in Dodoma.

His remarks were welcomed with applause and celebratory ululation.

Mr Magufuli also commended the priest and worshippers for not wearing gloves and masks to protect themselves from the virus.

What else has he said?

He made similar comments last Friday during a teachers’ conference, declaring “corona is finished”.

“The health minister told me that we only have four patients in Dar es Salaam but this will not stop rumors to the contrary,” he said.

“We need to be careful because some of these donations to fight coronavirus could be used to transmit the virus.

“I want to urge you Tanzanians not to accept donations of masks, instead tell the donors to go and use them with their wives and children,” he added.

The Tanzanian president is among several African leaders who have received orders for a herbal tonic touted by the president of Madagascar as a cure for Covid-19. It is unclear if it has been given to patients in Tanzania.

There is no scientific proof that the tonic works and the WHO has urged people not to use unproven medication.

Opposition politicians have criticised Mr Magufuli in the past for promoting policies that could harm the health of Tanzanians.

The head of Tanzania’s medical association, Elisha Osati, backed the government in a recent BBC interview, saying that hospitals were operating as normal and that the majority of coronavirus inpatients were suffering from mild symptoms.

Mr Magufuli has accused the country’s health officials of exaggerating the coronavirus crisis. He has also ridiculed the strict measures neighbouring countries have imposed to fight the pandemic.