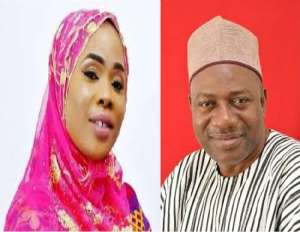 The people of Upper West region always remain loyal to the National Democratic Congress (NDC) because of the unprecedented development former president Rawlings has brought to the region, sons of the region were given key ministerial positions during his administration. The J.J. administration created the upper west region, extended electricity to the region, constructions and tarring of major roads, establishment of Wa Polytechnic, University for Development Studies and major infrastructural development. There is even the notion that, even if a goat is contesting election on the ticket of NDC, that goat will surely win the election. So the NDC continues to win in the region due to the good works of former President J.J. Rawlings. The region since 1992 NDC continues to win the presidential and parliamentary elections and known as one of the strongholds of NDC in Ghana.

In 2008 Hon. Rashid Pelpuo went unopposed as NDC parliamentary candidates and won the seat with twenty five thousand four hundred and fourteen (25, 414) votes representing 58.43%, Clement Eledi returns back as NPP candidates with total votes of seventeen thousand three hundred and forty-three (17, 343) votes representing 40.19%. Analytically, Rashid votes have pushed up indicating that because there was no primaries for NDC parliamentary candidates means there was no divisions in the party and no skirt and blows voting in the parliamentary elections.

In the 2012 election, Hon. Rashid did not get the opportunity to go into the polls unopposed, he was challenged by Hon. Hudu Mogtari in the primaries and he won vigorously and represent the party face in the 2012 elections with votes of twenty-eight thousand one hundred and forty-nine (28, 149) representing 49.31%, Hon. Issahaku Tahiru Moomin a new face from the New Patriotic Party (NPP) who won the party primaries also pull twenty-two thousand three hundred and four (22,304) votes representing 39.07%, Papa Kwesi Ndoum newly created Progressive People’s Party (PPP) candidate, Hon. James Sohimwinye managed to get three thousand one hundred seventy-five (3,175) votes representing 5.08%. It can, however, be construed from the figures that the new patriotic party did not drop votes but rather gain more votes while the NDC drop votes to PPP parliamentary candidate.

From the 2012 and 2016 elections, you will realize that the NDC parliamentary candidate continues to win at a diminishing rate while the NPP candidate also continues to gain more votes. The NPP wisely picked a native of Wa with an enviable reputation, Muslim, popular and game-changer candidate, who comes with fresh dynamism and strategies on the political table, he created employment opportunity for a lot of the youth in the constituency, gives them hope and support hence gain more votes in the 2012 and 2016 elections. Hon. Issahaku Tahiru Moomin also brought young men and women onboard and a very solid campaign team to canvas votes for the party.

Looking onto the forthcoming 2020 general elections, Hon. Rashid Pelpuo was contested by Dr. Sharif Khalid Mahmud, Hon. Alhaji Yakubu Duogo and lawyer Wahid Bampuori and Hon Rashid apparently won the primaries, there are some who have the notion that Hon. Rashid has served the seat for long and needed to be changed for a new person to represent the face of Wa central constituency in Ghana’s parliament, a good number of people also believe that he should be changed but he’s continually been contested by the wrong candidates because those who usually contested him don’t come home except during elections. ‘Cola last long in the mouths of those who value it’, Majority of the NDC supporters in the constituency also believe that, Hon. Rashid is performing extremely well hence always wins the primaries. His hard-work and competence got him deputy majority leader in parliament, youth and sports minister and minister of state at the presidency, he is known to extend electricity to almost all villages in his constituency, extend pipe born water, drill boreholes in almost all communities, pay students’ school fee, create employment opportunities’ and secure scholarships to his constituents. He’s achievement speaks in volumes to those close to him, his communicators must speak louder on his achievements in the constituency. He needs to strategies his campaign and communication team to be more vibrant and also resolve factions in the constituency before going into election 2020.

The constituency endorses a candidate that attends ceremonial’s, festivals, pray, play and eat with them because they believe in “Tijaabunyani” (we are all the same) hymn.

The regional chairman of NDC Mr Sani Bunas openly declared that ‘Not in My Tenure Will NDC Lose Wa Central Seat’ (homeradionews.com)25/10/2019.

The NPP for the first time picked a female candidate as their parliamentary candidate to contest the Wa central constituency seat, Hajia Humu Awudu made history by beating three other aspirants including the current Municipal Chief Executive (MCE) for Wa which most people believe was the friction between him and his constituency chairman. The businesswoman and philanthropist said she came for the election because of the youth, brilliant but needy, poor women who have no money to make their dreams come true. The beautiful smart-looking Hajia Humu created and secure jobs for a lot of youth and women in the constituency within the shortest period of time, she also secures scholarship’s, support religious bodies and set-up a foundation known as Hajia Humu Foundation (HHF). Her gargantuan achievement gets her more youth support and gains her popularity in the constituency. She is recognized by a very courageous and influential Zongo youth camp known as ‘Z-town’ and other camps in the constituency. Hajia Humu Awudu has become a household name in Wa and growing very fast in the political ladder. The NPP constituency chairman, Alhaji Ali Kamara marketed her and give her all the prerequisite backing that made her win the primaries and still guiding and campaigning vigorously for her to unseat the current MP.

Most political parties have its eyes on some reputable Ghanaian women who, in their opinion should muster courage to challenge their male counterparts in elections. The upper west region has no women representation in parliament, women who qualify for top positions in Ghana should be encouraged to go for them because women have fewer “human temptations” than men and therefore, are more likely to be better leaders. Dr Aggrey once said that when you educate a woman you educate a nation. This adage can be extended to include the fact that when you put your trust in a woman-leader, you invariably put your trust in the group she leads.

Both candidates have the fervent desire to substantially edification of the lives of their constituents’, offering them a sense of hope, development and socio-political inclusiveness, take charge of their full potentials and fulfil their various dreams.

Will the people of Wa central constituency for the first time switch to the first NPP female parliamentary candidate, Hon. Humu Awudu as their MP or will maintain the current MP, Hon. Rashid Pelpuo?