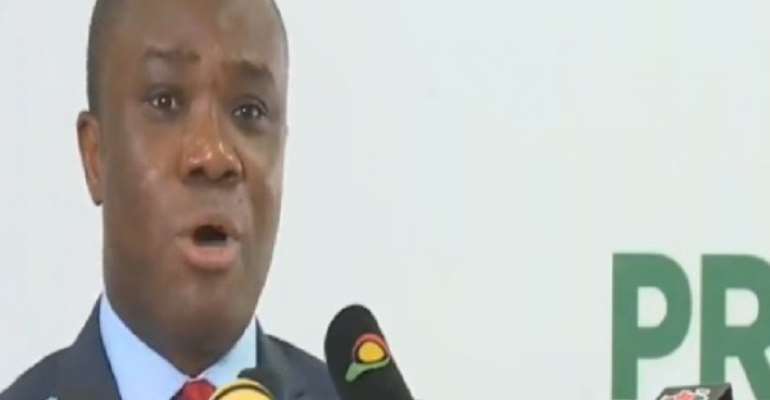 The opposition National Democratic Congress (NDC) has stated that the infrastructure projects in its 'Green Book' are real and visible on the field for all and sundry to testify.

The party said 'there is not a single project in the book which does not exist on the ground today or for which clear context has not been provided regarding its status. Anybody interested in the truth would match what is stated in the book to what exists'.

Mr Felix Ofosu Kwakye, the Former Deputy Minister of Communications, said this on Monday at a press briefing in Accra to debunk statement by President Akufo-Addo that the developmental projects in the book were non-existing.

President Akufo-Addo in his address at the commissioning of the Tema Motorway Interchange on Friday, June 5, 2020, said the NDC's so-called unprecedented infrastructure development of the Mahama administration was fantasy, existing in the Green Book and not on the ground.

Responding to that assertion, Mr Kwakye described the statement as untrue, saying the projects in the book were evident on the ground including the Ridge Hospital, the University of Ghana Medical Centre, the Kwame Nkrumah Interchange and Kasoa Interchange projects.

“Our Green Book, officially titled “Accounting to the people”, is arguably the most famous book that chronicles the achievements of a Ghanaian government. Its contents have been widely publicised and are well known to the generality of the Ghanaian people”, he said.

On the Tema Motorway Interchange, Mr Kwakye said the project was the brainchild and handiworks of former President Mahama.

“The project was funded by a Japanese Grant of $ 57 million applied for in 2013 by the Mahama administration. The survey for the development of the project and the tender process began at the behest of the Japanese government through JICA in March 2015.

The survey and design were completed in December 2016 and a detailed report presented in February 2017 when the Akufo-Addo government was barely a month old”.

Touching on education, the former Deputy Minister of Communications said the NDC's record in terms of educational infrastructure far outweighs that of the New Patriotic Party (NPP).

“The NDC government constructed 1,347 classroom blocks at kindergarten level between 2010 and 2016, undertook a total of 5,128 different projects at the basic school level comprising of 3,322 classroom blocks at Primary and Junior High School level, 73 Teacher accommodation facilities, 1,161 washrooms, and 82 water systems At SHS level”, he added.

According to him, the NPP can boast of only 196 classroom block projects in the educational sector to its credit since 2017 after having access to over GHc250 billion.

In the area of water provision, Mr Kwakye said the NDC increased water supply capacity by 109.7 million gallons per day to serve an additional seven million Ghanaians in over 2,000 communities across the country.

“Our infrastructure development in the country is unprecedentedly spanning from the aviation sector to rail development. We will continue to project our developmental projects to Ghanaians because they are verifiable on the ground”.