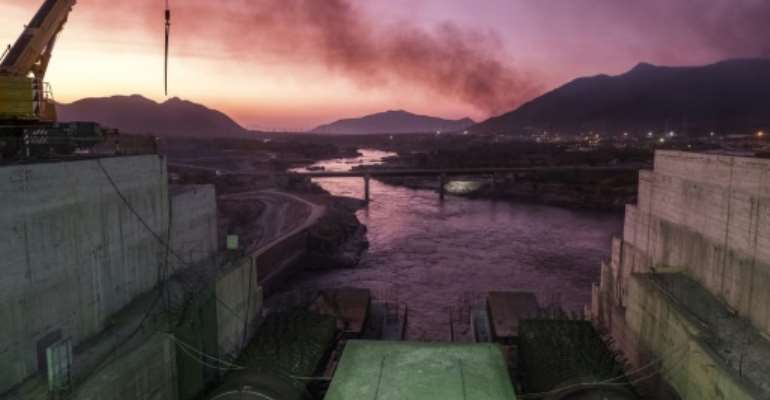 Planned as Africa's largest hydroelectric installation, the Grand Ethiopian Renaissance Dam has been a source of tension with Egypt. By EDUARDO SOTERAS (AFP/File)

Sudan, Egypt and Ethiopia will resume negotiations on Tuesday over the filling of a controversial mega-dam Addis Ababa is building over the Nile, Khartoum said.

Irrigation and water ministers from the three Nile basin countries will meet via videoconference, Sudan's irrigation ministry said in a statement.

"Three observers from the United States, the European Union and South Africa will attend," it added.

Planned as Africa's largest hydroelectric installation, the Grand Ethiopian Renaissance Dam on the Blue Nile has been a source of tension with Egypt ever since Ethiopia broke ground on the project in 2011.

Following nine years of stalled negotiations, the United States and the World Bank sponsored talks from November 2019 aimed at reaching an agreement between the three riparian states.

In May, Egypt announced it was re-entering talks over the filling of the dam's 74 billion cubic metre reservoir, in order "to reach a fair, balanced and comprehensive agreement."

Earlier in May, Sudan had rejected an Ethiopian proposal to sign an initial agreement greenlighting the filling of the reservoir, citing outstanding "legal and technical problems".

Both Khartoum and Cairo fear the 145-metre-high dam will threaten their essential water supplies once the reservoir starts being filled in July as planned by Addis Ababa.

But while Egypt worries about its share of the Nile, upon which it depends for most of its water, Sudan hopes the dam could provide much-needed electricity and help regulate flooding.

High Court shoot down Agordzo's application to travel
16 minutes ago

ASEPA to file RTI request for minutes of Justice Dotse-AG 'S...
16 minutes ago