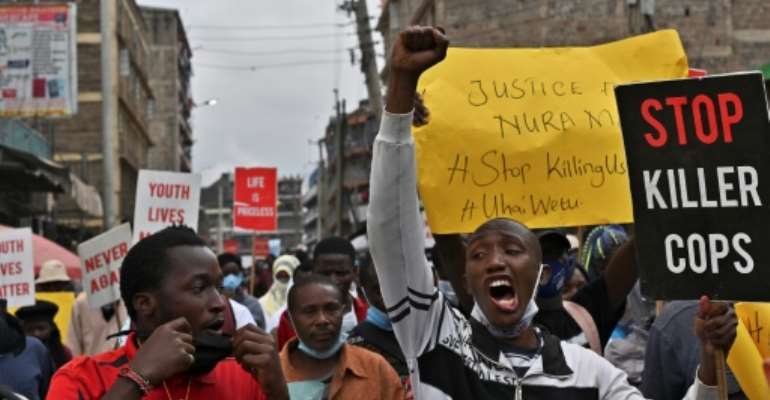 Around 200 people turned out Monday for a protest in a poor Nairobi neighbourhood against police violence linked to the deaths of 15 people nationwide since the authorities imposed a curfew to fight coronavirus.

The crowd in the Mathare neighbourhood was composed mostly of young people and mothers carrying signs with the names of friends, neighbours and sons killed in police operations in recent years.

"I am here to protest for our youth who have died in the hands of the police without any wrongdoings and we are saying enough is enough. As mothers, many of our youths have been killed while being labelled as thieves," said Mathare resident Rahma Wako.

Some 15 deaths and "31 incidents where victims sustained injuries" have been "directly linked to actions of police officers during the curfew enforcement", it said.

In recent days, cities around the world have seen massive protests against racism and police violence prompted by last month's police killing of George Floyd, a 46-year-old unarmed black man in the US state of Minnesota.

Though Floyd's killing has not led to major protests in Kenya, activists on social media have seized the moment to highlight the country's own scourge of police brutality, which typically goes unpunished.

In April, Human Rights Watch (HRW) accused the police of imposing the coronavirus curfew in a "chaotic and violent manner from the start", sometimes whipping, kicking and teargassing people to force them off the streets.

It described the case of 13-year-old Yassin Hussein Moyo who died in Nairobi on March 31 after being shot while standing on his balcony as police forced people into their homes on the street below.

Other cases include a tomato seller who died in western Kakamega after being hit by a teargas canister, and four men who were beaten to death in different parts of the country.

Interior Minister Fred Matiangi on Friday criticised police excesses, but "took exception to painting the entire service with the same brush", his office said in a statement.

On Thursday, the IPOA announced six police officers would be arrested and prosecuted -- one for Moyo's death; another for shooting dead a secondary school teacher while responding to a burglary at a market in western Siaya; and four others for seriously assaulting a man during an arrest.

Fuel price increases: Akufo-Addo, Bawumia callous about the ...
18 minutes ago

Cape Coast Airport will be constructed at all cost - Akufo-A...
18 minutes ago