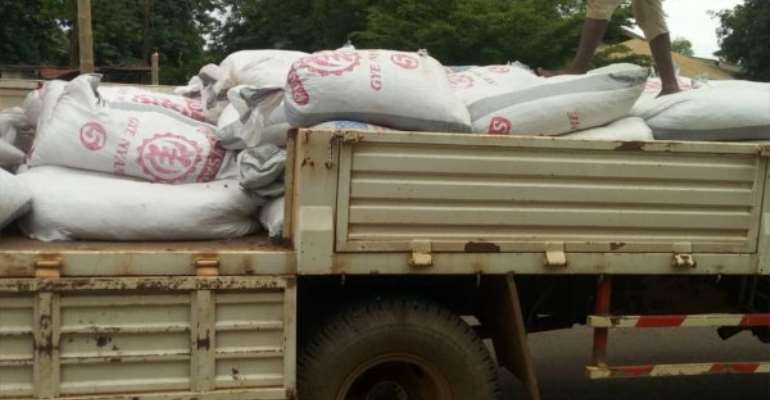 Officials from Akanu Sector Command of the Ghana Immigration Service have intercepted 79 un-standardised bags of raw cocoa beans being smuggled out of Ghana to neighbouring Togo.

The arrest was made at about 0148 hours on June 04, 2020 at Deme in the Ketu North Municipality, when some five persons attempted transporting the goods in five Apsonic motorcycles through an unapproved route to Togo.

Mr Felix Agyeman-Bosompeh, the Sector Commander during the official handing over of the impounded goods to officials from Volta/Oti Region of Ghana Cocoa Board (COCOBOD) said the Command had information on the intended smuggling of the cocoa beans necessitating a patrol team to be on alert to foil the plan.

He said the suspects tested the alertness of the patrol team by first smuggling 10 bags of fertilizer across the border on two trips and feeling assured that they were safe to operate, attempted transporting the “five motorcycles fully loaded with the cocoa beans.”

Mr Agyeman-Bosompem said his men were committed to duty and had stepped up anti-smuggling operations saying, “We make a lot of interceptions all the time including; vehicles with planting for food and Jobs (PFJ) fertilizers and marijuana.”

The Sector Commander therefore warned all smugglers thinking the Akanu area was an easy route for them to ply their trade to desist as, “this terrain is as rough as they can imagine” and called on his officers to always be professional and not countenance any individual or group to beat the system.

Mr Wisdom Delali Amexame, Volta/Oti Regional Head, COCOBOD said his outfit was collaborating with border security agencies to arrest the smuggling of cocoa beans out of the country to enable government recoup part of its investments in the cocoa sector and the needed revenue for infrastructure development in the country.

“Government makes huge investment including; providing seedlings to farmers, mass spraying, cocoa pollination, mass pruning and subsidised fertilizers to improve yields and so, I see such farmers who after all these find means to smuggle their cocoa beans out of Ghana to deny government revenue, as unpatriotic. Last week, our Boss was in the region and described these farmers as evil and I agree with him on that,” he said.

Mr Amexame added that COCOBOD recently announced it was going to construct the Have-Jasikan stretch of the Eastern Corridor Road and the only “means we get revenue to carry out the projects is when farmers bring their produce to us to buy and not smuggle them out.”