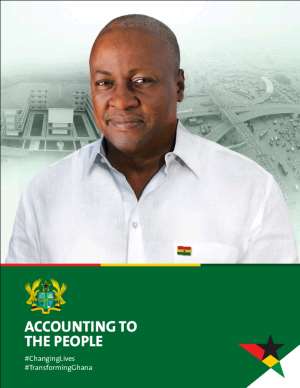 “.... That is why the completion of phase one of the Tema Interchange project is such a welcome development. We made a pledge to the Ghanaian people to expand and improve the road network while closing the missing links in the networks.

We had to make this pledge because we knew that the so-called unprecedented infrastructure development of the Mahama administration was a fantasy existing in the Green Book and not on the ground.”

The above was the exact statement made by President Akufo Addo during the commissioning of the Tema Motorway Interchange project on Friday, 5th June 2020.

First and foremost, my interest is not on whose legacy is the Tema Motorway Interchange project. Because all parliamentary, ministerial, and media records clearly and indisputably show that the John Mahama administration initiated and commenced the said project before it exited power in January 2017.

However, my interest is on the president's continuous references to the Green Book of the John Mahama led NDC government, describing the projects in there as fantasies. Mr. President, really?

It is regrettably to note that, the generality of the NPP from the president to the last person has consistently and deliberately been misleading Ghanaians on the current nature of the roads in the country. Interestingly, their main weapon for this their marasmus propaganda has always been the Green Book of the NDC. However, what they have failed to do as a government and party communicators is to have told Ghanaians wherein the Green Book the NDC claimed they had constructed all the roads in the country.

As a concerned citizen, I find it as a duty to set the record straight on what was said with regard to Ghana's road infrastructure. On page 99 of the Green Book, this is what is captured; "We are working on many road projects to open up the country to reduce road traffic accidents, boost economic activities, and bring foodstuffs to the market centres with ease.

Despite a large number of road projects underway, there still remains a lot to be done in the sector. There is however considerable evidence to show that no effect is being spared to fix the country's roads". Those were the words of President John Dramani Mahama in his 2015 State of the Nation Address captured in the book.

So Mr. President, since when did "despite a large number of road projects underway, there still remains a lot to be done in the sector" become synonymous to "all roads in Ghana have been constructed"?

Again, Mr. President, the only serious thing you and your government [NPP] can do to expose the NDC is to tell Ghanaians which of the interchanges, highways, town roads, cocoa roads, eastern corridor roads in the Greater Accra, Ashanti, Volta, Northern, Upper West, Upper East, Western, Eastern, Central and Brong-Ahafo regions, captured in pages 100-112 of the Green Book that was said to be either completed or ongoing was a ghost project or a fantasy. Anything short of that means your government is engaging in peddling propaganda and untruths to the detriment of the already suffering Ghanaian.

One can imagine where we would have been as a country if those ongoing road projects initiated by the John Mahama administration were not halted by this government for the so-called "auditing" but were continued in the last three and half years.

The wickedness and political gimmicks of this NPP government is what has led us to where we are today and so president Akufo Addo and his supposed men should stop blaming the NDC for their poor record in the roads sector of the country's economy.

President Akufo-Addo’s sterling leadership saved us from COV...
44 minutes ago