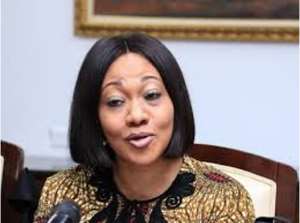 I was going to use these columns today to make sense of some stuff I heard Mr. Kweku Baako put out during an appearance on Peace FM about aspects of the history of “Kume Preko” – the protest marches that hit Ghana in 1995. I did put out a commentary on the subject myself, following a get-together by some members of the original AFC. It is fair that others would wish to react….

But more important issues have come up, so I will reserve my detailed reactions to next May, if God blesses us to see the 26th anniversary of the historic protest marches.

Hopefully, by then, Mr. Baako’s magnum opus, supported by great baskets full of documents, on the theme of Kume Preko, would also have been published as the self-proclaimed definitive inerrant history of the marches. Unlike him, I will keep my word and go no further than these initial remarks. Please check out, if interested, his long chat with Kwami Sefa Kayi on the subject after he had said he would not say much but ended with upwards of 30 minutes of quite heated words, words, words…

If Covid-19 has overtaken it in priority, it is right that it should, and we must focus our attention there. There’s another priority: Election 2020, only six months away. With its potential for promoting our democracy or dashing it into smithereens, it is equally befitting to consider its inclusion in the basket of Ghana’s priority of priorities…

This consideration must have been the guiding hand that has led to a number of interventions spanning from President Rawlings, President Kufuor, to the National House of Chiefs, to the National Federation of Labour to IMANI’s encounter with the Asanteman Council last week. The chief priest of Nungua, the chief of Buipe, have come out openly to advice Jean Mensa to back off.

The EC’s own botched pilot registration exercise is making things look decidedly ominous and helplessly dire. In a major development, the Supreme Court has asked the EC to provide the legal basis for denying the use of the current voter ID in the compilation of the new register.

This has now been thrown into serious doubt as a result of the very explosive allegations Kevin Taylor has levelled against the court and the presidency. His claim of a telephone call between the heads of these two arms of state should not be glossed over and must be followed up by CHRAJ. This is not a matter to be treated with contempt or for someone to be hauled in to face contempt charges. The CJ, with the apprehension gripping the nation in these times, will have to recuse himself to allay our fears.

Some serious interested parties and stakeholders have appealed to the UN, AU and ECOWAS to intervene.

Details from these interventions are out there in the public domain, so I will not repeat them here but one line from the National House of Chiefs says it all. It sits at the very core of good governance and goes beyond Jean Mena and the EC.

Nananom in their wisdom are telling us, if we did not know already, that, “…power is not exercised in a vacuum, and so it would be naïve to think that a constitutionally created ‘independent body’ has unfettered powers.”

Nananom are in perfect alignment with the constitution, which enunciates the principle that “all powers of Government spring from the sovereign Will of the people; The Principle of Universal Adult Suffrage.”

From POROG (If the US has POTUS, we can also coin our own), to the lowliest public servant, you do not have any powers vested in your person which you can exercise with impunity, capriciously or whimsically. The power is in the office, not the person. The people therefore have the right to question a POROG, for example, on his/her idea of a priority of priorities that is clearly a wasteful and divisive ego trip or an EC chair who defies the general public good to pursue a partisan political agenda.

Madam Charlotte Osei, the former chair of the EC, after giving us free, fair and violence-free elections in 2016 was unfairly and unjustly pushed out of office to make way for Madam Jean Mensa. Since then, a feeling of foreboding has gripped our country. Madam Jean Mensa stepped into her role with undisguised haste to undo all that her predecessors had achieved, after several cycles of successful local and national elections. She went straight for the jugular by deciding to bleed a perfectly working system with her “new voters register”. She was cautioned by very well-meaning institutions, organizations and citizens, to go easy on her agenda, which was maddeningly taking the shape of a terrifying disenfranchising animal…

Only six months to Election Day and a pilot exercise is turning out to be beyond the competence of Madam Mensa and her commission. With these hardware issues still to resolve, the fundamental question of who can vote or not is still hanging. In fact, it is even looking like the issue is, “who should”, not “who can” vote because the evidence presented by savants is pointing to the deliberate attempt to disenfranchise huge swathes of the electorate. There is no need to split hairs on this one: using only a Ghana passport or Ghana card as the primary IDs to register to vote when the majority of qualified voters already have valid Voter IDs from 1992, upgraded for the elections of 1996, 2000, 2012, 2016 and even local elections of 2019, raises the question of motive.

When I voted in the 2019 local elections, the machine was so fast and efficient that I even commented on how impressed I was. It did not take more than 10 seconds or thereabouts for the machine to recognise my biometric signature and in its own voice cleared me to vote. Millions of others went through similar hassle-free experiences – only six months ago…For me as an end user, and taxpayer, that’s all that matters. And this is what Jean Mensa says, with the backing of her principals that we should chuck out of the window and when we talk, she ducks behind her “power” in the constitution for justification and defence. And now look at what we are seeing: A “new” system that is not likely to deliver Election 2020. It is the delusion of “unfettered power” that is now threatening the survival of our democracy.

No matter the outcome of all these interventions, it is the motive and integrity of Jean Mensa and the EC that would eventually determine whether this homeland Ghana of ours would be a land worth dying for or not...

1. Is there evidence that the register we have used for elections successfully since the beginning of the fourth Republic so flawed as to lack credibility and integrity for another election and therefore the need for an entirely new replacement? The current governing party flaunts its claim that it harvested a million or more votes from that same register to earn the right to form a government.

2. Is there evidence that the proposed new register would disenfranchise large swathes of the electorate by deliberate and mischievous design or operational inefficiencies or both? Almost all the good governance CSOs and non-governing political parties and key institutions have voiced their suspicions and some have compiled evidence to argue their points.

An honest and dispassionate assessment of these not-too-difficult questions should provide us with the compass to set ourselves on track to December 2020. Sadly, for whatever reason, that is what Jean Mensa and the EC are deflecting with their idea of their “unfettered power” and in the process setting our country on edge…

But why blame Jean Mensa? She is only trying to implement the marching orders of the man who appointed her – Mr. Cathedral himself – the man who once declared that in politics, “All die be die”. So you see…?

And let us not forget: The governing party’s leader in parliament. Kyei Mensah Bonsu has been reported as saying that with the new register, there is no way the NDC can ever win an election in Ghana. And even more scary, the deputy general secretary of the governing party has served notice that what happened at Ayawaso West Wuogon last January was just the beginning. What info is the governing party’s parliamentary leader privy to, to have arrived at his definitive and monumental conclusion and what’s the deputy general secretary standing on to issue his blood-curdling threats?

Do I smell the making of a full-blown dictatorship through electoral manipulation of a democratic environment?

Feature Article
Powered By Modern Ghana
The Sins Of The Ordinary Ghanaian
Here is your stone, Sefa Kayi: We are indeed being ‘killed’ by hypocrisy and dishonesty
Hope In A Fractured World: The Dystopia Of Suicide
Confronting Human Extinction And Post-Human Approaches To COVID 19 Pandemic In Africa
Ghana’s Criminal Justice System - The Case Of Jury Trials
Ghana: Democracy in the test phase?
Akufo-Addo Goofed About Planting For Food Employment Figures
Aliens’ Compliance Order Was a Healthy Progress Party Policy Initiative
The Museveni Govt Has A Lot Of 'Useful Idiots!'
COVID-19 Updates Live Dashboard
TOP STORIES

Okada Will Be Safe If Business Is Legalised, Regulated — Oka...
27 minutes ago