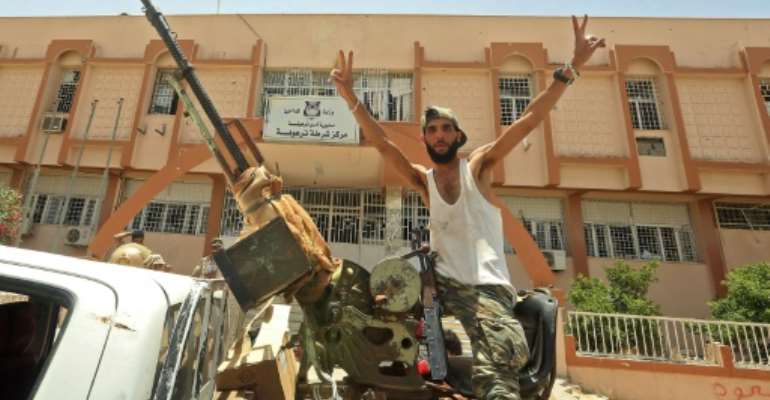 A fighter loyal to Libya's UN-recognised Government of National Accord in the recaptured town of Tarhuna on June 5. By Mahmud TURKIA (AFP)

Fighters loyal to Libya's UN-recognised government Sunday kept up their counter-offensive against forces of strongman Khalifa Haftar, but fighting slowed on the outskirts of the strategic city of Sirte.

The Mediterranean coastal city -- the home of former dictator Moamer Kadhafi, who was ousted and killed in 2011 in a NATO-backed uprising -- is also a key gateway to the country's major oil fields in the east.

The Turkish-backed Government of National Accord (GNA) based in Tripoli has in recent weeks retaken all remaining outposts of western Libya from pro-Haftar loyalists, who had sought to capture the capital in a 14-month offensive.

Haftar, following his string of military setbacks, was in Cairo on Saturday where he supported a ceasefire proposal made by his key backer, President Abdel Fattah al-Sisi, meant to take effect at 0400 GMT Monday.

The so-called "Cairo declaration" called for the withdrawal of "foreign mercenaries from all Libyan territory, dismantling militias and handing over their weaponry," Sisi said.

But the resurgent GNA has rejected the truce plan and bombarded Sirte, the last major settlement before the traditional boundary between western Libya and the east, Haftar's traditional stronghold.

Mohamad Gnounou, a spokesman for the GNA's forces, declared on Saturday that "we will choose the time and place when" the war ends. 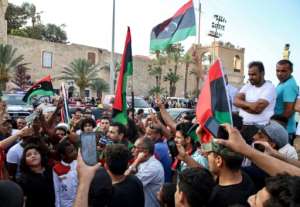 People celebrate in the Libyan capital Tripoli on June 4 after the UN-recognised Government of National Accord (GNA) said it was back in full control of the capital and its suburbs. By Mahmud TURKIA (AFP/File)

He said air strikes were targeting enemy positions in Sirte and "orders have been given to our forces to begin their advance and to systematically attack all rebel positions".

Pro-GNA forces also said they had on Saturday shot down a Chinese-made Wing Loong drone supplied by the Emirates to the Haftar camp nearby.

However, fighting stalled on the outskirts of the city on Sunday, GNA sources acknowledged. 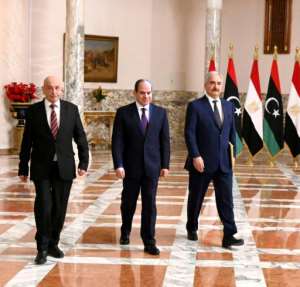 Libya has been in chaos since the fall of Kadhafi, which also opened a new gateway in North Africa for desperate migrants bound for Europe.

The latest key chapter in the Libya conflict, Haftar's offensive on Tripoli -- which began in April 2019 -- has resulted in hundreds of deaths, many of them civilians, and has driven more than 200,000 people from their homes.

Haftar -- a 76-year-old former Kadhafi loyalist turned defector who spent years living in the United States -- has vowed to rule all of Libya, painting his enemies as jihadists and terrorists.

He has been backed by powers including Russia, the United Arab Emirates and neighbouring Egypt with aircraft, high-tech weapons and allegedly also mercenaries.

But Turkey in recent months stepped up its support for the GNA, sending military advisers, weaponised drones and reportedly also Syrian mercenaries to tip the battlefield balance.

In early January, when Haftar's forces were still besieging Tripoli, they also took Sirte, almost without fighting, after securing the allegiance of a local armed Islamist group.

Previously Sirte, some 450 kilometres (280 miles) east of the capital, had been controlled by pro-GNA forces dominated by fighters from Misrata who had earlier driven out the Islamic State jihadist group from the city.

Sirte is key for access to Libya's crucial "oil crescent", which has been blockaded by pro-Haftar groups since January, heavily impacting the sector that is virtually the only source of national income.

The Libyan National Oil Company on its website deplored "a severe drop" in oil revenues, "estimated at 97 percent compared to April 2019", although much of this was also down to the huge slump in global oil prices.

The security situation meanwhile remained fragile and confused elsewhere in the west, especially in Tarhuna, the last pro-Haftar stronghold to be recaptured by GNA forces.

Tripoli authorities warned against acts of reprisal or looting in the city, threatening severe criminal prosecution regardless of function or rank.

The GNA's interior ministry on Saturday called on the military and security forces in charge in the "liberated areas" to ensure the protection of the "lives, dignity and property" of citizens.

Rights group Amnesty International warned last week that "war crimes and other violations" may have been committed by warring parties near Tripoli.

These included indiscriminate attacks, looting and the planting of anti-personnel landmines in homes, Amnesty said, often in retaliation against civilians for their perceived affiliation to one side or another.