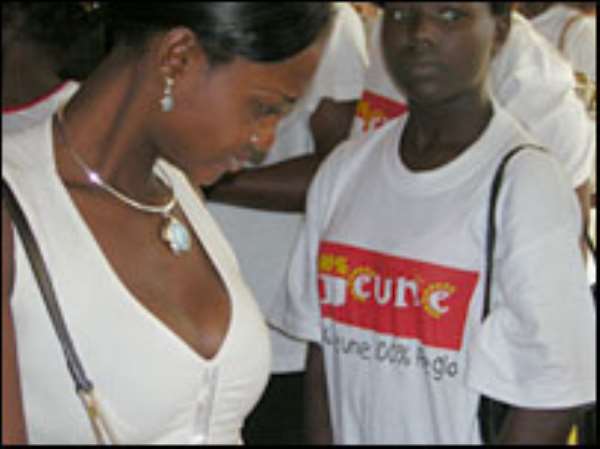 A nationwide campaign is under way in Cameroon to discourage the widespread practice of "breast ironing".

This involves pounding and massaging the developing breasts of young girls with hot objects to try to make them disappear.

Statistics show that 26% of Cameroonian girls at puberty undergo it, as many mothers believe it protects their daughters from the sexual advances of boys and men who think children are ripe for sex once their breasts begin to grow.

The most widely used instrument to flatten the breasts is a wooden pestle, used for pounding tubers in the kitchen. Heated bananas and coconut shells are also used.

"I was crying and trembling to escape but there was no way."

Another woman from Mamfe in south-west Cameroon told me she ironed her own breasts as a girl so that she would not be forced into early marriage as is the practice in her village.

"I wanted to go to school like other girls who had no breasts," Emilia said.

Many mothers have no regrets about ironing their daughter's breasts.

"Breast ironing is not a new thing. I am happy I protected my daughter. I could not stand the thought of boys spoiling her with sex before she completed school," one woman explained.

"Unfortunately, television is encouraging all sorts of sexual immorality in our children."

Anthropologist Dr Flavien Ndonko says that breast ironing is not an effective method of preventing early sex and pregnancies because many of the girls still become pregnant. He recommends plain talking between parents and their daughters.

"What you have to really do is talk about the issue of sexual reproductive health with the child. So that she is aware about what it means growing up and having breasts or having periods," he says.

With the help of sponsors, a group of teenage girls called the Association of Aunties has produced a television campaign to expose the problems of breast ironing.

"Massaging the breasts of young girls is very dangerous. This is harmful to health... Do not force them to disappear or appear - allow them to grow naturally," one of the adverts says.

So far, no research has taken place on the medical effects of breast ironing.

However, Prof Anderson Doh, a cancer surgeon and director of the state-owned Gynaecological Hospital in Cameroon's capital, Yaounde, says the practice is dangerous.

"There are structures in the breast made of connective tissue. Now if you over iron the breast, if you use very hot objects, if you pound on the breast at this tender age when the structures are developing of course you could also cause damage," he says.

The victims do have protection under the law, as long as the matter is reported within a few months, lawyer Buba Ndefiembu says.

If a medical doctor determines that damage has been caused to the breasts, then the person responsible can go to jail for up to three years.

This does not always deter mothers who see their daughters hitting puberty earlier and earlier thanks to better living standards.

But the Association of Aunties hopes their campaign will start to change attitudes and spare other girls future physical and emotional pain.