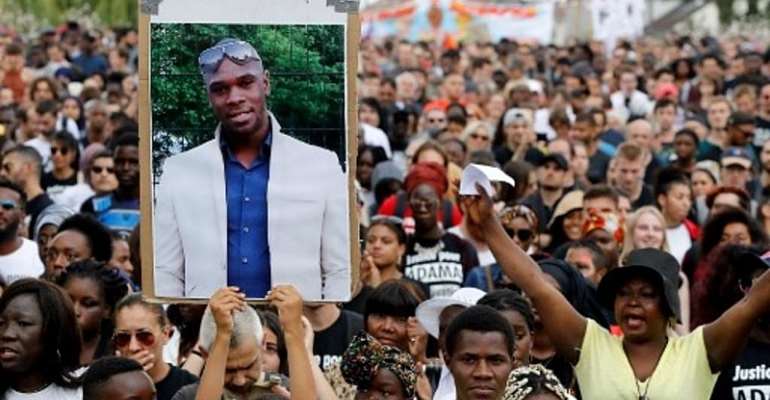 French judges investigating the death of Adama Traoré, a young black man who died in police custody in 2016, are to hear from two key witnesses who could help shed light on the long-running dispute into what killed him.

Among the witnesses is a 38-year-old man whom Traoré took refuge with right before his arrest; the second is a woman said to have witnessed the entire scene.

In July 2016, 24-year-old Traoré was stopped for an ID check with his brother Bagui, whom police suspected of extortion.

Not having his ID with him, Adama ran away, while Bagui stayed put.

Police found the suspect hiding in the house of the first witness and arrested him. Traoré died two hours later in custody at the Persan police station north of Paris. No footage of his arrest exists.

Since his death in 2016, six autopsies and counter-autopsies have been commissioned by both Traoré's family and police. The former claim the police's restraining technique suffocated him, while the state argues the victim had pre-existing symptoms.

Hearings in July
An initial statement from the first witness, who said he found Traoré lying on his floor in a "state of intense stress," seemed to corroborate the police's version.

However, the family challenged this version of events, and they were vindicated by the second witness, who contradicted the police.

Up until now, these two key witnesses were only heard by the Inspectorate-General of the National Police (IGPN), but never in the courts.

“It is unacceptable that we have had to wait years for such important witnesses to be heard,” Yassine Bouzrou, the lawyer for the Traoré family told French radio France Info.

Bouzrou has asked for the IGPN to be removed from the case amid fears of impartiality and a lack of independence.

The hearings, slated to take place in July, four years after Adama's death, are the latest twist in the legal wrangle opposing Traoré's family and the police.

Breakthrough in sight?
They are expected to shed light on whether the 24-year-old died from a pre-existing physical condition or the weight of the three officers in restraining him.

Traoré's family has made a direct parallel between his death and that of George Floyd, an unarmed black man who died from asphyxiation after a white officer knelt on his neck for more than 8 minutes.

However, lawyers defending the gendarmes have criticized the Traoré family for trying to import the US conflict into France, and denounce what they call a "trial by the media.”

Defense lawyer Rodolphe Bosselut, who represents two of the three gendarmes, has said that he will assist in the new hearings.

On Saturday, thousands of people were expected to brave a police ban on French streets to denounce police brutality, four days after another anti-racism rally in Paris drew over 20,000 people.