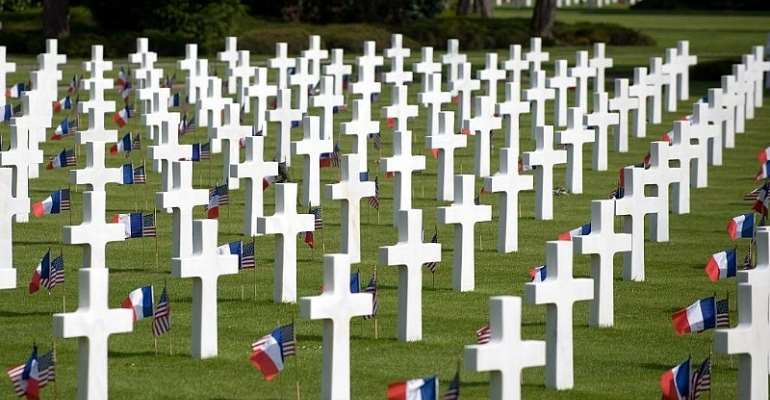 Small ceremonies were held in France on Saturday to mark the 76th anniversary of the D-Day landings that paved the way for the liberation of Western Europe from the Nazis.

Traditional large celebrations were scaled back due to coronavirus restrictions and in some cases foreign war veterans did not attend.

France paid a mostly low-key tribute Saturday to soldiers who died during the Battle of Normandy 76 years ago.

On 6 June, 1944, more than 150,000 Allied troops invaded the northern French coast, marking the start of France's liberation from Nazi occupiers.

"Usually, we welcome up to 100,000 people at this time in June, but this year it's empty," Marcel Bastide, the mayor of the village of Arromanches in Calvados told French website France Info.

Church bells ring
The beach town held small ceremonies and for the first time without US veterans, due to restrictions on public gatherings in light of the Covid-19 pandemic.

Instead, church bells in Calvados were due to ring simultaneously with bells in the English Channel at 18h44 British Summer Time, to mark the year of the Normandy landings.

Those, who were able to make the journey to France, such as UK ambassador Ed Llewellyn, took to Twitter to share their thoughts.

In other places like Saint-Mère-Eglise, the first town in Normandy to be liberated on 6 June, the main museum put on a special exhibition showcasing armored vehicles from the period as well as the landing of an American paratrooper. More than 6,000 Americans died on D-Day.

Capturing the day
Despite the cancellation of traditional flag-waving ceremonies and parades due to the coronavirus, tributes were captured and shared under the hashtag #DDayOverlordLive.

Digital commemorations were also held by the Normandy Institute, which streamed a video on YouTube recalling the sacrifice of the estimated 4,400 Allied troops who died storming the beaches of Normandy.

Featured in the short film, American actor Tom Hanks is quoted as saying: "What began with the liberation of just a few yards of French beach was stretched meters at a time (...) to go on without end, at a horrible cost of human misery, blood, and lost souls."

Hanks went on to say that without the Battle of Normandy, the freedom the world enjoys today would not exist, and this is why it matters still.