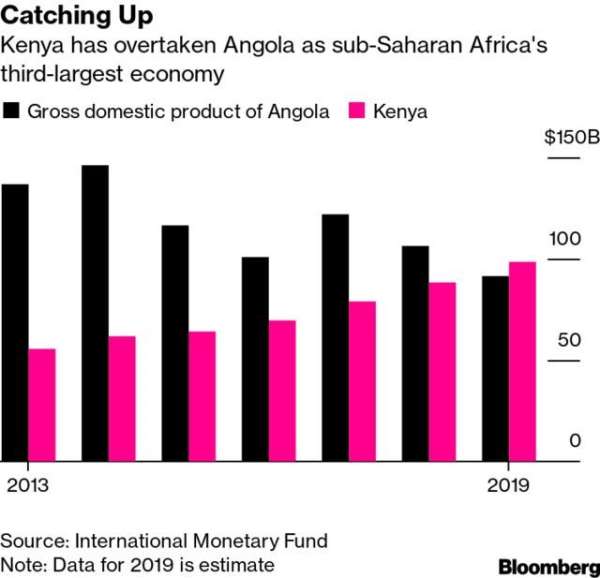 According to new estimates from the International Monetary Fund (IMF), Kenya’s economy has surpassed that of Angola to become the third-largest in Africa.

At present, Nigeria is the largest economy in the continent, after growing by 22.5 percent in the fourth quarter of 2019, marking the country’s highest quarterly growth since its 2016 recession.

South Africa, on the other hand, is Africa’s second-largest economy. It entered its second recession in 2 years after its GDP shrank by 1.4 percent in the fourth quarter of 2019.

Angola’s chief source of revenue—oil output—has declined, concurring with the 2019 devaluation of the Angolan Kwanza (Kz). The Kwanza tumbled to a record low last year as the country’s central bank sought to close the wide gap between official and black-market rates. That caused an overhaul in the Southern African nation’s foreign exchange regime.

As global demand fell off a cliff amid coronavirus-inspired lockdowns, oil companies lopped billions from planned spending. Angola, with its relatively high-cost offshore fields, was among the first on the chopping block. Reduced demand from the virus’s first victim, China—the top destination for Angolan oil—as well as hit the southern African country hard.

The country is the second-largest oil producer in sub-Saharan Africa and an OPEC member with an output of approximately 1.37 million barrels of oil per day (bpd) and an estimated 17,904.5 million cubic feet of natural gas production. Almost 75 percent of its oil production comes from offshore fields.

The COVID-19 pandemic did in a handful of months what even a 27-year-long civil war did not. The crisis brought oil drilling to a halt in Angola, posing a huge threat to its economic reforms. The crisis, in addition, is projected to make Angola’s GDP contract by 1.4 percent in 2020.

Kenya’s economy, on the other hand, is going to grow by 1 percent this year, according to the IMF. Also, the Kenyan Shilling (KES) held steady against the United States Dollar throughout 2019.

Recall that the World Bank has predicted that the economic implications of the coronavirus pandemic will usher Sub-Saharan Africa as a whole into its first recession in 25 years.

Fuel price increases: Akufo-Addo, Bawumia callous about the ...
36 minutes ago

Cape Coast Airport will be constructed at all cost - Akufo-A...
36 minutes ago