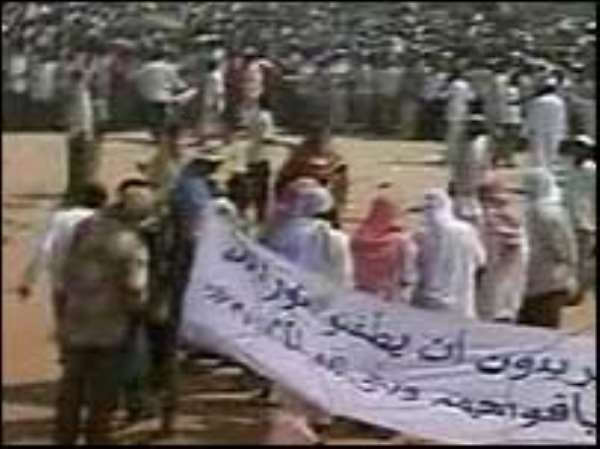 A Swedish cameraman has been shot dead during a huge rally in the Somali capital, Mogadishu, held to support Thursday's peace agreement.

A BBC correspondent saw a lone gunman shoot Martin Adler in the chest, in the middle of a crowd of thousands.

Mogadishu's Islamist leader has condemned the killing as "barbaric".

The peace deal was agreed in Sudan by the interim government and the Union of Islamic Courts, which took control of Mogadishu two weeks ago.

Both sides have agreed to recognise each other and to stop fighting, but some key issues remain unresolved.

It is not clear why the cameraman was targeted but correspondents say it will affect the Islamists' claims to have restored security to Mogadishu, which they seized two weeks ago.

The Islamists' opponents have blamed them for a series of assassinations in recent years.

The BBC's Hassan Barise in Mogadishu says Mr Adler was shot once at close range with a pistol during a commotion while an Ethiopian flag was set on fire.

"I could see the blood flowing out of his chest," our correspondent says.

The gunman fled into the crowd but Islamist leader Sheikh Sharif Sheikh Ahmed vowed to punish those responsible.

"We will take serious action on this matter," he told the AFP news agency.

"Those who did this are not responsible people and they don't represent the people of Mogadishu, the Islamic courts or the Somali people."

The marchers were also protesting against the suggestion that foreign peacekeepers be deployed in Somalia.

Interim President Abdullahi Yusuf wants peacekeepers but the Union of Islamic Courts is strongly opposed - especially to any involvement of troops from Ethiopia, which is seen as being close to Mr Yusuf.
The seven-point deal made no mention of this major disagreement between the two sides.

Another issue not addressed is whether the Islamists will join the interim government.

The Islamic courts' leader has said the movement does not want to establish its own government, but our correspondent says many Somalis feel that it does.

But our correspondent says nobody was expecting a deal after only one day of talks in Sudan.

The two sides also agreed to stop "media campaigns" against each other and to meet again on 15 July, when the outstanding issues may be addressed.

There have been fears of conflict between the Islamic courts, which control much of southern Somalia, and the interim government, based in Baidoa, 200km north of the capital, Mogadishu.

These fears increased last weekend after the Islamists said Ethiopian troops had crossed the border, apparently in support of Mr Yusuf's government.

International pressure is mounting for both sides to negotiate a peaceful settlement and to establish Somalia's first effective national government for 15 years.