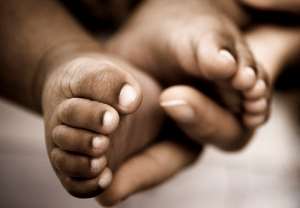 A woman who tested positive for COVID-19 has successfully delivered a baby through caesarean section whilst receiving treatment at the El-Wak Isolation and Treatment Centre in Accra.

This was the second of such births in Ghana after an infected mother delivered her baby in the Western Region at the Tarkwa Apinto Government Hospital.

Major Matthias Yeli Ahig, the Deputy Camp Commandant, in a Citi News interview explained that: “as part of her routine antenatal care, she was showing some symptoms that mimicked COVID-19 symptoms.”

“So a test was done and it came out that she was positive for coronavirus,” he added.

The diagnosis coincided with the time she was due to deliver the baby.

Major Anthony Moro, a nursing officer in charge at the facility noted that the “mother and baby are doing well.”

“As and when all that is supposed to be done is done, definitely she'll be discharged,” he added.

The El-Wak Isolation centre is one of the designated centres for treating persons with COVID-19.

Among its challenges, managers have had to improvise because it has exceeded its capacity.

It was originally designed to hold 26 people but now has 33 people being treated for the virus.

“We need to come up with innovative ways to still admit the patients that are coming here. So in view of that, we have converted some of the facilities that were initially not meant to be wards,” Major Matthias Yeli Ahig said.

The areas that were converted included the triaging area and laboratory centre.