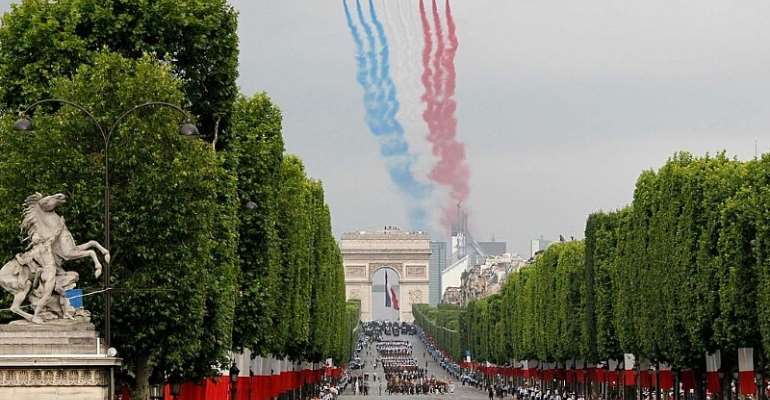 France on Thursday cancelled the 2020 Bastille Day military parade due to coronavirus social distancing requirements. It will be replaced by a tribute to health workers fighting the pandemic.

Rather than the traditional march of soldiers and military hardware down the Champs-Elysées on July 14, this year will see a much smaller ceremony at the Place de la Concorde.

This will be the first year without a parade since the end of World War II.

It normally starts at the Arc de Triomphe, a monument to those who fought for France, and ends at Concorde, where King Louis XVI was beheaded in 1793 in the revolution that overthrew France's monarchy.

Social distancing
This year, the square will host a military ceremony with some 2,000 participants and 2,500 guests, who will gather in strict respect of social distancing rules seeking to halt the spread of the coronavirus pandemic that has killed more than 29,000 people in France.

"It will be a reinvented 14th of July adapted to the circumstances," Defence Minister Florence Parly said.

The event will include a highlight of the yearly show -- the flypast -- in honour of medical personnel, military and all others "mobilised against the virus", the Elysées palace said.

Four other countries -- Germany, Switzerland, Austria and Luxembourg -- have been invited to attend this year's event to thank them for having taken coronavirus patients into their hospitals in regions bordering France, said the presidency.

No public
The event will likely not be open to the public, although this decision could be re-evaluated if the health situation improves.

A year earlier, two motorcyclists from the French national gendarmerie collided and fighter jets sprayed the colours of the nation's flag in the wrong order.

President Emmanuel Macron, in his first months in office, used the 2017 Bastille Day parade to wow his guest of honour, freshly inaugurated US President Donald Trump.

This year's ceremony will also pay tribute to resistance hero-turned-president Charles de Gaulle who died 50 years ago this year.