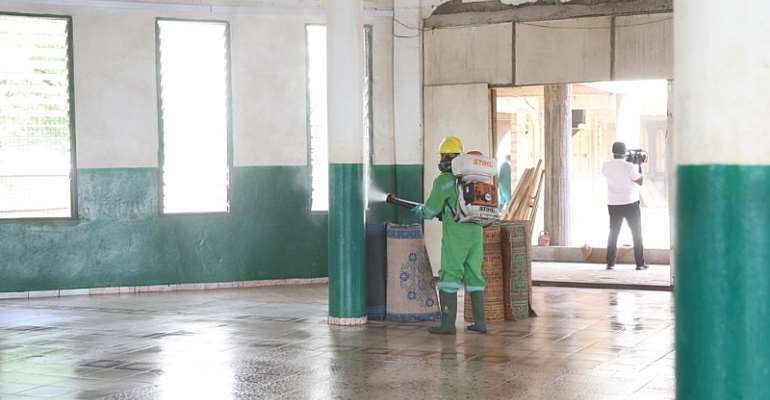 As part of efforts to contain the spread of the Covid-19, Zoomlion Ghana Limited on Thursday (June 06) disinfected nine (9) mosques in various parts of Accra.

The rest were Anlu Sunnah Mosque, Kardo Mosque – all in Nima and the Police Mosque, Cantonment.

The exercise followed an appeal by the National Chief Imam, Sheikh Osman Nuhu Sharubutu, for the disinfection of all Islamic facilities, including mosques across the country.

It was partly government-sponsored through the Ministry of Zongo and Inner-City Development, and also formed part of Zoomlion Ghana Limited’s corporate social responsibility (CSR).

One significant observation that ran throughout the exercise was that all the mosques that were disinfected had set-up Covid-19 Committees as directed by the central government.

That, according to the various Imams, who spoke to a cross-section of journalists, was to show how ready and prepared they were to observe Friday, (June 07) prayers (Jum'ah).

At the Madina Central Mosque, the Madina Chief, Baba Amadu Seidu, expressed the Moslem community’s appreciation to both the government and Zoomlion for the gesture.

He said adequate preparations have gone into Friday, (June 06) Jum'ah, following the government’s partial easing of the Covid-19 restrictions.

“We are a law-abiding people and so we will comply with all the directives and Covid-19 preventive protocols outlined by the President,” he assured.

He went on to stress that the Madina Central Mosque has also put in place the necessary measures to make sure that the 100 Moslems who will come to worship observe all the Covid-19 safety protocols.

According to him, the Moslem community in Madina and its environs have had several meetings with their chiefs and Imams all in an effort to ensure the safety of members during worship.

However, there were some reservations by the Ahmadiyya Muslim Mission regarding the restriction on the 100 people who must congregate for worship.

According to the deputy Ameer II, Alhamadiya Muslim Mission, Alhaji Wahab Issah, limiting the number of Moslems who must congregate and worship was not helpful.

“We can't pray with just 100 people, therefore, we have asked our members to stay at home,” he pointed out.

He also used the opportunity to commend Zoomlion and the government for the exercise and called on all Moslems to support in the country’s quest to fight the coronavirus.

Hottest Photo Reports
Catch up with all the political quotes from our politicians.
Advertise here
More Headlines
ModernGhana Links
I'm sorry, was running away from a prophecy that I'll be shot on October 18 – Shatta Wale apologises for faking gun attack
Police comb for Shatta Wale after reportedly shot
We Will Not Allow Anyone To Cheat Us In 2024 Elections — Mahama
Assemblies of God supports anti-LGBTQI+ Bill in a memo to Parliament
31.2km Assin Praso Assin Fosu road to be completed in November 2023
Your head should be properly examined if you think we'll sit down to be brutalised, murdered in 2024 elections again – Elvis Afriyie-Ankrah
Cape Coast Airport will be constructed at all cost - Akufo-Addo
‘We won but soldiers forced EC to declare results in NPP’s favour’ – Mahama
Komenda factory: "Mahama constructed the roof before building the foundation" - Akufo-Addo
TOP STORIES