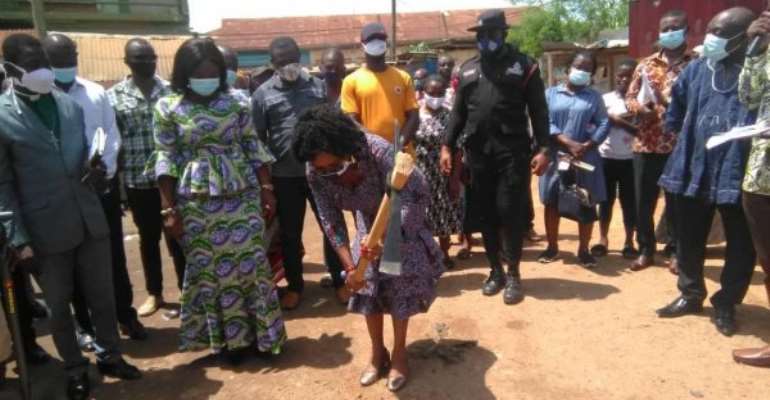 Three contractors are undertaking the job, which is being funded by the World Bank, and expected to be completed in six months.

She said the tarring of the roads was in fulfillment of a promise made to the chiefs and people by, Nana Addo Dankwa Akufo-Addo, when he visited the town in year 2018.

Mrs. Morrison, who is also the Member of Parliament (MP) for Agona West, said apart from the 2.5 kilometer of roads, there would be improvement of more other roads to give Swedru, a facelift.

The Roads and Highways Ministry had already awarded on contract, the Swedru School of Business campus road to join Swedru/Awutu-Bawjiase trunk road and the Woraba Estate-Swedru road.

Selected roads at Agona Nyakrom, Upper and Lower Bobikuma, would also be tarred.

Mrs. Morrison said the Akora River Bridge Project started by the previous National Democratic Congress (NDC) Administration had been re-packaged and re-awarded and that work was going to soon start on it.

She added that three bridges would be constructed at Old Swedru-Sawmill, Nkubem and Sabo- Zongo - Mahodwe Palace.

To ensure quality work and value for money, he said the RCC, had formed a Monitoring and Evaluation Team to supervise projects.

Mr. Boahene asked the Agona West Municipal Assembly to ensure that persons who would be affected by the road construction were compensated.

Mrs Justina Marigold Assan, the Municipal Chief Executive (MCE), praised the people for their support, cooperation and understanding after the project contractors and consultants had met to brief them.

She appealed to the contractors to work assiduously as the people were expecting them to complete the project on schedule.

Your Petition Is Opportunistic, Populist; We’re Already Prob...
10 hours ago