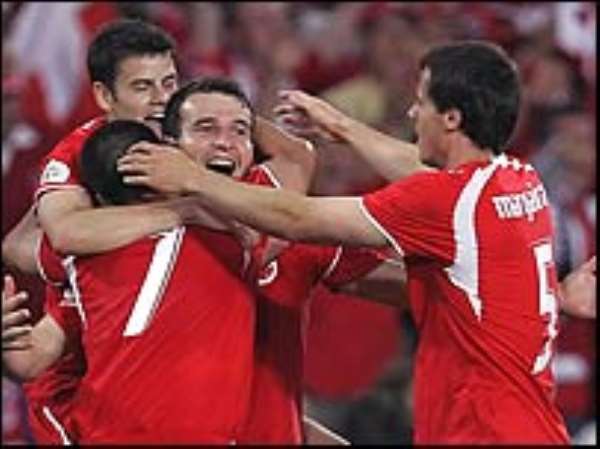 Switzerland booked their place in the second round with a gutsy victory in their final Group G game in Hannover.
Hakan Yakin's pin-point cross was met by the brave Philippe Senderos who powerfully headed Switzerland in front.

Frei rounded the keeper after the referee overruled his assistant's offside flag, ensuring the Swiss will now meet Ukraine in the second round.

The shutout ensured Switzerland preserve their 100% clean-sheet record from their three group games.

And heading into the game they only needed a point to qualify.

But their high-tempo start suggested they were keen to finish the group as winners.

Frei was the first to try his luck from distance, while at the other end Ji-Sung Park tested Pascal Zuberbuhler with a low drive from 30 yards.

And Switzerland's purposeful start was rewarded on 23 minutes when the superb Yakin bent in a pin-point free-kick that Senderos comprehensively dispatched.

The Arsenal centre-half's courage came at the expense of a nasty cut to his face after head-butting Jin-Cheul Choi in the process of scoring, leaving both players needing treatment.

Yakin's sweet left foot from set-pieces was a constant threat for the South Koreans and shortly before the break he stung the hands of Woon-Jae Lee with a free-kick.

South Korea produced their best chance of the half when Chun-Soo Lee broke through the Swiss defence and fired in a fierce drive that was well palmed away by Zuberbuhler.

And as the lively half came to a close, Switzerland were in pole position to win the group.

The South Koreans began the second half with more zest and pegged the Swiss back in their own half, who themselves looked happy to sit back and preserve their lead.

But despite Senderos' substitution following an awkward fall on his arm, the Switzerland defence looked comfortable in repelling the South Korean attacks.

At the other end, the solitary Swiss striker Frei had two chances to kill the game, the best of which crashed against the post.

Jin-Chul Choi should have done better with a free header while Jung-Hwan Ahn shot low.

But with 15 minutes left, referee Horacio Elizondo ignored his assistant's flag to allow Frei in to slot home Switzerland's second and seal the 2002's semi-finalists' fate.