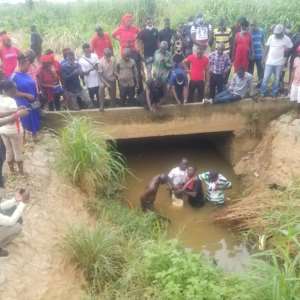 Some aggrieved supporters and delegates of the ruling New Patriotic Party (NPP) in the Asante Juaben constituency of the Ashanti region are in arms way with the national executives of the party for disqualifying a parliamentary aspirant Francis Owusu- Akyaw.

Second National Vice Chairman of the party Fredrick Freduah Antoh on Thursday announced on Kumasi-based Abusua FM that some aspirants have been disqualified from primaries, a decision the supporters say is unconstitutional sparking the protest.

The supporters first converged at the Naboam community soccer park before they moved in their numbers to a river known as Nuno to invoke curses on the national executives for being unfair to their aspirants.

The irate supporters are expected to address the media Friday afternoon.