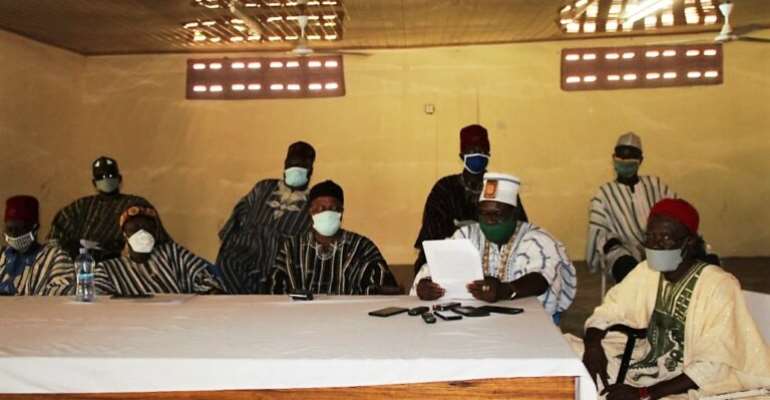 The Chairman of the Council of State has been petitioned to remind the Paramount Chief of Talensi, Naab Kugbilsong Nanlebegtang, of his role as one who should promote peace and not incite enmity in the Upper East Region.

The call, made by nine paramount chiefs in the Kassena-Nankana zone of the Upper East Region in a jointly signed communiqué, comes after the Paramount Chief of Talensi, who is also a member of the Council of State, reportedly led a delegation of paramount chiefs from the BONABOTO area of the region to the Jubilee House and made some utterances the chiefs and people of the Kassena-Nankana area consider to be against the collective interest of the region.

The meeting between the BONABOTO paramount chiefs and President Nana Addo Dankwa Akufo-Addo, held Friday 29th May, 2020, purportedly saw the Paramount Chief of Talensi, otherwise known as Tongraan, accuse the Minister for Aviation and Member of Parliament (MP) for Navrongo Central, Joseph Kofi Adda, of brewing tension in the region by plotting to reposition an airport project from a proposed site in the BONABOTO area to a different location in his Kassena-Nankana homeland.

The communiqué issued to the press Wednesday by the Kassena-Nankana paramount chiefs, who also have been yearning for a long-existing airstrip in their area to be upgraded, in reaction to the statement delivered by the Tongraan during the meeting at the Jubilee House highlights the conviction of the Kassena-Nankana natives that the Jubilee House visit was purposed to deny them the development due them.

“We wish to remind the Tongraan as an elected representative of the Upper East Region on the Council of State with the responsibility to promote peace and development and not to breed animosity among the peoples of the region and, therefore, call on the Chairman of the Council of State to call Tongraan to order and call him to order in rendering an unqualified apology to the Honourable Minister for Aviation and elected Member of Parliament of Navrongo Central Constituency as failure to do so will be construed as an insult to the people of the constituency and could result in an unhealthy relation amongst the people of the region.

“We demand and request an unqualified apology from the Tongraan for his unwarranted utterances against Honourable Joseph Kofi Adda, a senior member of the Government of Ghana, as one who has promoted persons of the region such as the BONABOTO Chief of Sakoti to a governing board position. They have no right to disrespect and denigrate or attempt to bring into disrepute the good name of anyone and attempt to impugn the character of a person or a senior public servant so duly and legitimately elected by the people of Ghana and appointed by His Excellency the President of the Republic of Ghana and in this case the Member of Parliament of the Navrongo Central Constituency and the Minister for Aviation, Honourable Joseph Kofi Adda,” said the communiqué.

Taking their views to local radio stations, some natives of the BONABOTO area also expressed strong disapproval of the Jubilee House visit, generally saying the delegation should have encompassed full representatives from the Upper East Regional House of Chiefs and should have been devoid of politics.

“Sometimes, our actions could be right; but if you don’t think through, it would end up creating chaos. Now, if they (the Kassena-Nankana paramount chiefs) also go [to the Jubilee House] they are going to make a case and, then, you would end up realising the fact that it’s going to be as if the BONABOTO enclave and the Kassena-Nankana area have issues.

“Ideally, we could have sent a delegation from the House of Chiefs to go and that would be more concrete than sending the BONABOTO area. I condemn it. This is not political. I’m speaking as a social commentator. I condemn it in no uncertain terms. Chiefs are supposed to be neutral. To mobilise chiefs from a particular zone to go and do that, mark my word, is not going to help anybody at all. Now, it looks as if we went there because we want BONABOTO to develop to the detriment of other areas. If you develop and other areas do not develop, what do you seek to achieve? We have now opened the Pandora’s box. For me, I think the best thing that has happened to the people of Navrongo is Kofi Adda. I’m not hiding it. I’m saying it on authority today,” a popular Nabdam-born social commentator and sympathiser of the governing New Patriotic Party (NPP), Animah Daniel Ashaiman, told Simon Agana on Word Community Watch Show, a current affairs programme on Zuarungu-based Word FM.