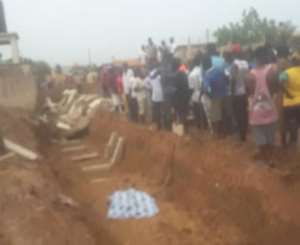 This was after a wall collapsed on them at Ashorman estate on Friday morning.

The victims, according to an eyewitness are workers of a construction firm working on streets around the Small Dome market area of the Ashorman second lotto kiosk.

One of the victims died on the spot while the two others who were reportedly rushed to the Ashorman Community Hospital also passed on minutes after.