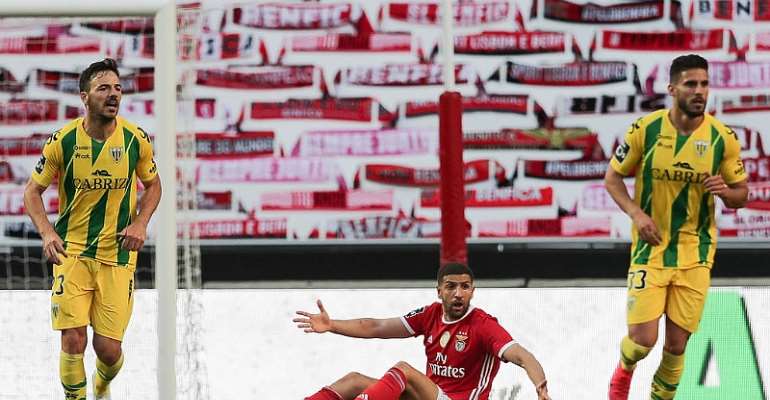 Title-chasing Benfica continued where they left off before the Portuguese top flight was suspended in March due to the coronavirus pandemic. Bruno Lage's men drew 0-0 at home to Tondela - their third consecutive Primeira Liga stalemate.

However the point earned on Thursday night in Lisbon was enough to send them top on goal difference ahead of Porto who marked their return from the two month hiatus with a 2-1 defeat on Wednesday at Familicao.

Before the championship was closed down as Portugal battled the spread of the coronavirus pandemic, Benfica drew 1-1 with Vitoria Setubal and Moreirense.

Those dropped points allowed Porto to take a one point lead.

Opportunity lost
Sergio Conceicao's players fluffed their chance to extend that advantage with the setback at Famalicao.

Benfica, though, were unable to exploit their fortune with a victory that would have given them a two point lead.

Instead both teams have 60 points and with nine games remaining the tussle for the title remains  intense in only the second major European league to resume after lockdowns to fight the coronavirus.

In May, Germany became the first championship to restart after football authorities agreed to strict health protocols including regular testing of players for the coronavirus. Matches also have to be played behind closed doors.

Rules for return
Similar guidelines are operating in Portugal. And In the absence of fans at the 65,000 seat Estadio da Luz, scarves were draped across some rows of seats.

Such images are likely when the English Premier League resumes on 17 June with Spain's La Liga and Italy's Serie A scheduled to follow suit later during the month.

In France, where the Ligue de Football Professionnel declared the season over on 30 April, three first division clubs took their complaints about the termination to the country's top court.

Amiens and Toulouse challenge the LFP's decision that relegated them to the second division while Lyon want Ligue 1 to be resumed.

Football authorities in the Netherlands, Belgium and Scotland also declared the season over due to  the coronavirus pandemic.

While no champion was anointed in the Netherlands, Club Brugge and Celtic were awarded the titles in Belgium and Scotland respectively.