“But When You Grow Restless”: Isaac’s Message And Esau’s Example For Africans 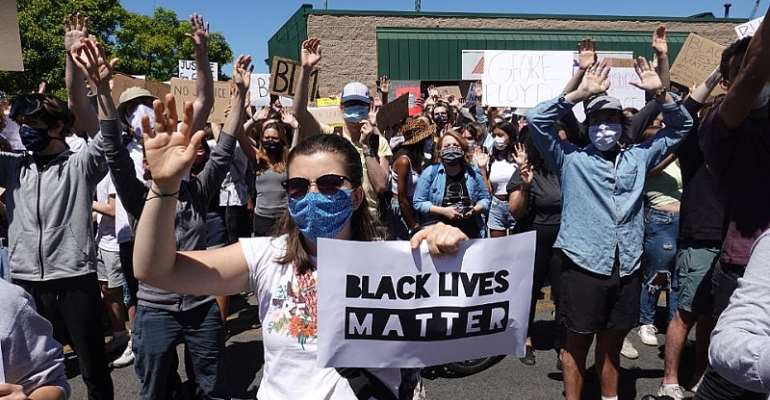 The recent flare of anger against racism has metastasized from the United States of America to include Africa and other European countries. This evening, a group of protestors in Birmingham also embarked on a demonstration to challenge subtle racism in the United Kingdom.

Yesterday, I did indicate that racism is a challenge of the heart. Consequently, for the world to overcome the snare of racism, we must honestly answer the question: "How do I love someone who is not like me?"

In other words, how do we bridge cultural – and less of biological – gaps among people in the world? To answer this question, I argued that we need a radical transformation of the heart. This is precisely because doses of education will only defer racism to a period when it is convenient to pull it out. In the same way, institutional reforms will go as long as people do not feel stressed to pull the racial idioms. I concluded that it will take the transformative work of the Gospel of Jesus Christ to free the world from the heavy yoke racism.

As part of fulfilling cultural demands, he decided to transfer the patriarchal blessing to his oldest son – Esau, who was senior to Jacob (even though they were twins). Isaac was doing this against the fact that prophecy had indicated that Esau was going to serve Jacob. Incidentally, the prophecy did not tell how Jacob was going to exercise dominance over his elder brother. It is, therefore, plausible to conclude that Isaac was performing what custom demanded.

But he had to bless in love. In many cases, we bless out of love. If I bless my children, it is because I love them. So, for Isaac to bless Esau, Isaac had to first rekindle his love for his son. And since food is central to human beings – especially as a bio-cultural construct – Isaac requested for his favourite food to be supplied him. And since it was the primary occupation of Esau to hunt for meat, Isaac charged Esau to prepare food for him. The food was expected to be the favourite meal of Isaac. In response, Esau went straight into hunting to get his father’s request. It is possible that Esau invested in the hunting and cooking his father’s meal because Esau wanted to redeem his birth-right, which he sold to his younger brother.

While Esau was away, Rebecca sneaked in to supplant the blessing that was due Esau. She conspired with her son, Jacob, to rob Esau of his (Esau’s) blessings. In the end, Jacob succeeded in supplanting his brother. Isaac tried to detect the fishy deal that was going on, but he was too old to have understood the joint conspiracy of mother and son. In the end, Isaac ended up blessing Jacob, instead of Esau.

Esau returned from the field with his father’s food only to realise that his younger brother had outwitted him for the second time. He was justifiably angry. But he still pleaded for his father’s remaining blessing. He asked whether his father could reproduce the blessing. He framed this as follows: “Do you have only one blessing, my father? Bless me too, my father! Then Esau wept aloud” (Genesis 27:38). Esau’s exasperation was also because he had been made subservient to his young brother. He was going to serve his younger brother. The flow of life had been turned upside down for Esau.

But as he persisted in urging his father to reproduce his (Isaac) blessings, Isaac told him a statement that is perhaps more important than the blessings Esau lost to his brother. The statement was, “You will serve your brother. But when you grow restless, you will throw his yoke from off your neck” (Genesis 27:40b). My interest in this statement is the adjective of time, "when" that Isaac used. My understanding is that Isaac did not see Esau's challenge as fatalistic. He also did not see it as a challenge that would continue in perpetuity. This means his servitude to his brother was time-bound. But it was not just time-bound, it was based on what Esau did. Isaac told Esau that Esau needed to become "restless". The issue of restlessness is important because the blessing pronounced on Jacob had made Esau the bearer of the yoke of Jacob. Esau must feel restless. He must feel the pain of being a servant. He must endure to break free from his brother’s bondage.

It is important to highlight that Esau was also responsible for losing his blessing to his brother. He sold his birth-right to his brother in a very difficult circumstance. He was hungry. He was at the verge of death. And since he needed food to survive, he did not see the importance of birth-right when he would not even live long enough to enjoy the benefits associated with birth-right. Contrary to what most people think, Esau did not sell away his birth-right cheaply. But it is also true that he was not foresighted enough when he sold his birth-right. He did not learn to persevere. He sacrificed his future for temporary benefit. He did not become “restless” to go look for his own food. In the end, his sense of restlessness was dulled and numbed. He sold his birth-right. To regain his birth-right, he needed to be restless. He needed to feel the need to be free. This is because one’s restlessness implies one becoming uncomfortable with one’s predicament.

Esau told Jacob when they met that, “I already have plenty, my brother. Keep what you have for yourself” (Genesis 33:9). Because Esau had worked hard to break his brother’s yoke on him, when he met Jacob, he had forgotten about how Jacob supplanted him. There was, therefore, no need for tension or fighting. If Esau was poor by the time he met Jacob, Esau would have possibly blamed his brother and killed him in the process.

Africa's story is not markedly different from Esau's. As a people, we conspired in selling our own kin and kith into slavery. We exchanged human beings to satisfy temporary and mundane needs. Slave trade thrived and survived in Africa for long because some of our political elites became greedy and were interested in satisfying their interest. They sacrificed the future of the continent to satisfy their immediate needs.

Consequently, Africa has borne the burden of selling its birth-right to the rest of the world. As I write, many African leaders still go about begging for the crumbs that fall from the table of other continents. Some of our leaders cheaply sell the birth-rights of the continent to the rest of the world. Lands in Africa are being grabbed by other people. In Ghana, some Ghanaians, including chiefs, have connived with some Chinese expatriates to do illegal mining (labelled as “Galamsey”). Through illegal mining, our water bodies have been significantly polluted. Elsewhere in Africa, the Chinese are grabbing lands for agricultural activities to feed China. Africa has become a continent that dwells in a paradox: it is the richest and yet the poorest.

In the face of all this, the important question to ask is: Is Africa becoming restless? It is only when we become restless that we will break free from the yoke of the control of other continents of the world. Until we break free from the yoke of the rest of the world, the tension between us and the rest of the world would continue to persist. We must be restless. We must work hard. But we should not just be restless. We must have a kind of restless that is purposive. In other words, it is not just enough shouting that we are not inferior. It is not just enough demonstrating on the street against racism. We need to direct our anger into productivity.

In 2007, James Watson the Nobel-winning biologist, James Watson, drew global criticism when he claimed that Africans are inferior-minded people. Just like the response that met with the murder of George Floyd, Watson was condemned by his own colleague scientists. In Africa, we shouted and condemned him. But since 2007, we are still heavily dependent on the West. We still look up to the West for our redemption. This is not to say that Africa has since the beginning of time not produced top scientists. The challenge is that most of our scientists blaze the trail in continents other than Africa. Very few African scientists have made a name for themselves by engaging in experimental science on the continent. We need to be restless to build our laboratories to produce our home-grown scientists.

For us to be restless, we must learn to do things for ourselves. We cannot control how the West or East profile us. But we have control over how we respond to racial profiling. Our response to racial profiling is about whether we approve it or negate it. But certainly, it is not by merely shouting and demonstrating. If after ranting, shouting, roaring, and demonstrating, we still live under the sufferance of the rest of the world, we would still not be free from the yoke.

As a Zongo young man, coming from Maamobi – urban slum in Accra, I knew I had some challenges. Those of us from Zongo had been profiled as criminals and drug addicts. In school, we are jeered at. The challenge I had was to either fulfil the profiling or work hard to challenge the profiling. By God’s grace, I have achieved some successes in my academic pursuit. I graduated with unprecedented First Class in B.A. African Studies from the University of Cape Coast in 2008. In 2010, I also received an award for academic excellence at the Institute of African Studies, University of Ghana, where I studied for my Master of Philosophy. I have a few academic articles to my credit.

Breaking the yoke of profiling was not easy. I had to do my first degree and master’s degree without a laptop or computer. My “twin” brother, Kofi Semanu Atsu Adzei, and I had to print copies of books on credit basis. We benefitted from the benevolence of Auntie Gladys, who runs her business "Acadec" at the Mathematics and Statistics Department of the University of Ghana. Breaking free from the yoke was not a child's play. I spent lots of sleepless night reading. Coming from Maamobi where noisemaking was almost the norm, I had to wait till deep into the night when virtually most people had gone to bed before I read. I have also combined learning and working since when I was at the age of 10 years. Breaking the yoke is difficult. But we cannot kowtow to your yoke.

I pray that we will become restless and break the yoke of self-imposed servitude.