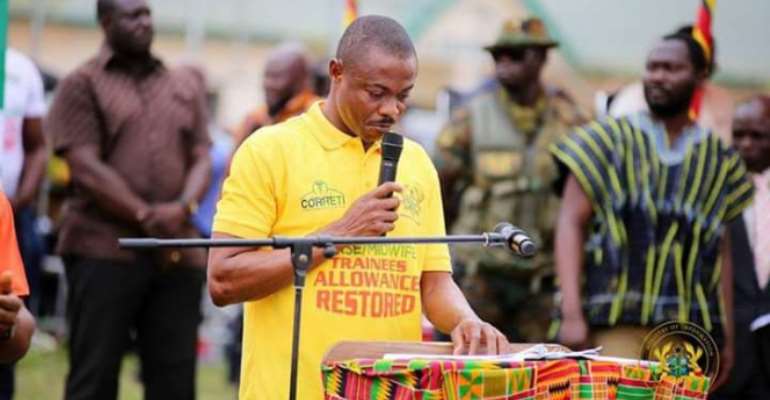 It is very imperative to note that Traditional authorities and various youth groups in the Ahafo Area have been petitioning successive Governments on the creation of the Ahafo Region for over forty years ago but it couldn't materialise.

The immediate past president of the Republic of Ghana, H.E. John Dramani Mahama even gave deaf ears for the creation of the Ahafo Region and never deemed it necessary for the people.

A Commission of enquiries was set to organise public hearings, sampling of opinions, and the referendum was held on the 27th December 2018 for the creation of new regions in Ghana of which Ahafo was not exempted.

GOASO was announced as the CAPITAL on the 14th February, 2019 of the new Ahafo Region which was created out of the old Brong Ahafo Region.

The Regional Minister, Hon. Evans Opoku Bobie ( MP) stated emphatically on a rounded pricket that, the creation of Ahafo Region was part of the president's effort to bring Governance and Development to the doorstep of the people, particularly, hard and soft infrastructure.

According to the Section 188 (2) of the Local Governance Act 2016, (Act 936) mandates the Ahafo Regional Coordinating Council the approval of the by-laws of the District Assemblies in the region subject to their consistency with national legislation.

Moreover, the Ahafo Regional Coordinating Council has oversight responsibility for second-cycle educational institutions and regional hospitals in the region on behalf of the Ministries of education and health. The resolution of any conflicts between a District Assembly in the region and any agency of the central Government, public corporation, statutory body, Non-Governmental Organisation, and individual.

The Council is also responsible to provide a District Planning Authority with the information and data necessary to assist the Authority in the formulation of a district development plan.

The Office of the Ahafo Regional Coordinating Council started operating in April 2019 with the posting of key management staff to the region by Head of Service of Local Government service.

It is worthy to note that the Article 256 of Ghana's Constitution and Section 187 of the Local Governance Act, 2016 (Act 936) establishes the membership of the Regional Coordinating Council as the Regional Minister and Deputy or Deputies, the presiding member of each District Assembly in the region and the District Chief Executive of each district in the region, two chiefs from the Regional House of Chiefs and the Regional heads of the Decentralised Ministries in the region as members without the right to vote.

Hon. Evans Opoku Bobie (MP) called on every tom, dick, and harry to support the Ahafo Regional Coordinating Council to make it one of the best among the sixteen regions in Ghana. He used the opportunity and advised the audience to stay alert and observe all the COVID 19 protocols so that we can all defeat this Coronavirus Pandemic.

He congratulated the COVID 19 team in the region, security agencies, and the entire people of the region on the COVID-19 fight. So far, the Ahafo Region is the one and only Region that has not recorded a single case of Coronavirus Pandemic.