Africa’s Pride: Ghana Through To Next Round! 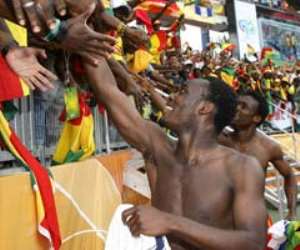 Ghana in their first ever FIFA World Cup appearance have booked a place in the second round of Germany 2006, following their 2-1 win over a spirited USA team.

Both teams started slowly but the match came to life in the 17th minute when Haminu Dramani robbed Claudio Reyna of the ball on the edge of the penalty area and proceeded to bury the chance past Kasey Keller in the USA goal.

Just before half time it the turn of the Black Stars to make a defensive error, as they allowed DaMarcus Beasley to race clear and play a perfect cross for Clint Dempsey to charge onto and smash home the equaliser.

There was drama in the dying seconds of first half stoppage time when Oguchi Onyewu was adjudged to have pushed Razak Pimpong in an aerial challenge and referee Markus Merk pointed the penalty spot. Captain Stephen Appiah made no mistake with the chance, cracking it into the roof of the net to give the Black Stars a deserved half time lead.

The second half was somewhat of a stop-start affair, as Ghana were prepared to concede free kicks to break up the flow of America's play.

The Black Stars were given a big fright when a Brian McBride diving header from Eddie Lewis's low cross rebounded off of the upright in the 66th minute. Minutes later Onyewu headed an effort mere centimeters over Richard Kingson's crossbar, as the United States began to asset themselves on the match.

USA relentlessly attacked the Ghanaian defence, but the Black Stars' crafty tactic of forcing the American attacks to wide areas paid sweet dividends, with John Mensah particularly immense in the heart of the African's backline.

The final whistle saw scenes of wild celebration for the Ghanaians, as the weight of their achievement came crashing sweetly down on the jubilant Black Stars camp.