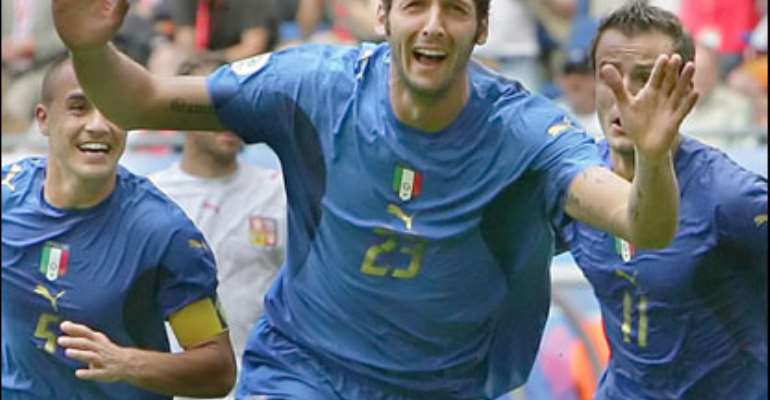 Italy won 2-0 to finish top of Group E and eliminate the Czech Republic from the World Cup.
Substitute Marco Materazzi scored the opening goal after 26 minutes with a powerful header from a corner.

The Czech's hopes of progress effectively ended when Jan Polak was sent off for a second bookable offence in first-half stoppage time.

And Filippo Inzaghi killed the game off near the end when he broke from almost halfway to round Petr Cech and score.

The Czech Republic had started the tournament in superb form by beating the USA 3-0, but their fortunes changed when Jan Koller went off with a hamstring injury near the end of that game.

Devoid of a focal point in attack, they were convincingly beaten in their next game by Ghana before losing to Italy.

The Italians were not overly impressive in this match, but did enough to win and set up a seemingly straightforward passage to the semi-finals.

They are likely to face Australia in the second round and, if they win that, probably the Ukraine or Switzerland.

The Czech Republic made a strong start to the match and their skipper, Pavel Nedved, was inevitably prominent.

Milan Baros was put through by a delicious curling pass from Nedved after nine minutes, but the Aston Villa striker's touch was heavy and Gianluigi Buffon smothered.

Minutes later, Nedved tested his Juventus team-mate Buffon with two searing drives from the edge of the area.

Francesco Totti was at the heart of many of Italy's attacks, but his side lacked fluidity in the early stages.

Their first goal came from the unlikely source of Materazzi, who had come on in place of the injured Alessandro Nesta after 26 minutes.

Totti delivered an inswinging corner from the right and the Inter Milan defender rose above Jan Polak to power in a header from nine yards out.

The goal knocked the Czech Republic's confidence. Their early exuberance petered out and Baros began to look isolated in attack.

And their predicament became even worse when Polak was shown a red card after two minutes of first-half stoppage time.

The defender, who had earlier been booked for a crude challenge on Mauro Camoranesi, brought down Totti from behind and was given a second yellow.

Totti made the most of the tackle by rolling around theatrically, but the referee had little option but to send Polak off.

Czech coach Karel Bruckner brought on skilful winger Jiri Stajner in place of veteran Karel Poborsky at the interval and his side pushed forward in search of goals.

The talismanic Nedved surged forward from midfield to find himself one-on-one with Buffon after only a few minutes.

His shot was blistering, but too close to the keeper, who parried.

The increasing adventurousness - and numerical disadvantage - of the Czech Republic inevitably left space for Italy.

Inzaghi, who came on for Alberto Gilardino after 61 minutes, wastefully put a header wide after a jinking run from Andrea Pirlo.

But he made no mistake three minutes from the end when he evaded the offside trap to advance unhindered from the halfway line and round Cech to score.