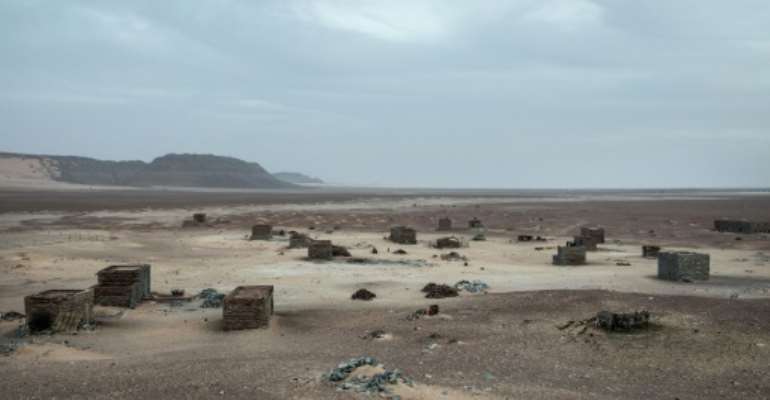 Tichitt was once a thriving town on the trans-Saharan caravan route but is all but forgotten today. By JOHN WESSELS (AFP)

A few centuries ago, Tichitt was a citadel of trade where Saharan merchants bearing gold, salt and cloth would stop to water their camels and haggle.

Today, red-and-white signs in the sand dunes point to where this once great hub of commerce and centre of Islamic culture lies.

But visitors to Tichitt, a UNESCO world heritage site, are few now, and the great outpost in arid central southern Mauritania is all but forgotten.

"Sometimes a month will go by without a car coming," Cherif Mokhtar Mbaka, an English teacher in the town, says sadly.

Grey-stone buildings dating from its golden age have survived but little else in the town of 2,470 residents, according to a 2016 census, points to its rich heritage.

Today's traders arrive in Tichitt on a monthly supply truck, bringing rice and pasta to local shops, and leave with salt from a nearby saline field. By JOHN WESSELS (AFP)

The trans-Saharan caravan route that flourished between the 11th and 19th centuries brought a steady stream of traders to Tichitt, en route to Timbuktu and settlements in the Niger river basin.

"The decline began when the trade began to prefer sea routes rather than land routes," Mbaka says.

"Now it's over, and people are facing many problems."

Today, the traders who come arrive on a monthly supply truck, bringing rice and pasta to the local shops -- and leave again, with salt mined from a nearby saline plain, or sebkha.

Tichitt has lost another economic lifeline, too, in its more recent past.

The renowned Paris-Dakar Rally used to pass through, bringing a caravan of race car drivers, journalists and tourists.

"The old airstrip laid down by the French in the colonial era was redeveloped for the rally," said local dignitary Mohamed Teya, recalling how dozens of planes used to touch down during the event.

But, in 2009, organisers relocated the off-road race to South America due to security threats in the Sahara and the runway has since disappeared.

Likewise, Tichitt's reputation as a jewel of Islamic culture has faded.

As well as the unique architecture from its heyday, carefully maintained by UNESCO and the Mauritanian government which stipulate that new buildings retain the style, reams of yellowing historic manuscripts have survived.

The documents are stored haphazardly in people's homes.

High school headmaster Mouhamedou Ahmadou set up a group to preserve them about 20 years ago and was allotted a house for the purpose.

But he has few resources for the job and their future looks bleak.

"These manuscripts are like old people and children: they are fragile," Ahmadou says.

The Paris-Dakar Rally used to pass through Tichitt, bringing a caravan of drivers, journalists and tourists, but was relocated to South America in 2009  . By JOHN WESSELS (AFP)

Towns like Timbuktu in Mali -- renowned worldwide for historically important manuscripts -- benefit from foreign funding, or even temperature-controlled rooms, he points out.

"Look here! We're in the heart of the desert and it's hot," Ahmadou exclaims.

As he pulls out works from the shelves written mostly during the 7th and 8th century Arab conquests, the dust clouds make everyone in the room cough.

Even within an already sparsely populated country of some four million, its isolation makes life difficult and expensive.

There's a small clinic offering first aid -- and an ambulance, one of the six cars in the town, jokes local official Mohamed Teya.

For more serious treatment, people must go to the hospital in Tidjikja, the regional capital about 230 kilometres (143 miles) away.

"We need a road," the mayor bemoans.

Yet, the petrol station -- two pumps and a sign in the sand -- is often empty.

Many try to make a living elsewhere.

"There's nothing to do here, no work, no opportunities," says Gildou Muhamedou Babui, 34, dressed in a sky-blue boubou.

High school headmaster Mouhamedou Ahmadou set up a group to preserve Tichitt's historic manuscripts about 20 years ago but has few resources. By JOHN WESSELS (AFP)

Some find jobs at the palm grove, he says. Others work at the salt field, paid a few ouguiyas for their heavy manual labour, cutting the salt and loading up the camels of passing traders impatient to be on their way.

Babui himself tried to find work in the capital Nouakchott and in the northwestern town of Atar but to no avail.

He now keeps the accounts at the town hall.