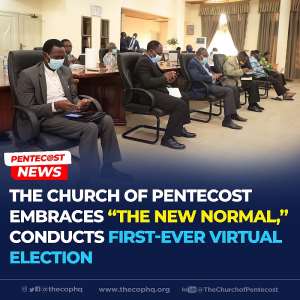 The year 2020 will forever be etched in the memories of every person alive today as a year that took the world by storm. It was the year when the world grappled with what most have referred to as the biggest public health pandemic of the 21st century – the COVID-19 pandemic.

From the thousands of lives lost, the imposition of human restrictions and bans as well as other disturbing developments such as loss of jobs, public health crises, and the closure of churches across the globe, COVID-19, also known as “Coronavirus,” will certainly be very difficult to forget.

Indeed, the Church is undoubtedly one of the hardest-hit institutions in the wake of the pandemic. The ban on mass gathering, in particular, resulted in the indefinite suspension of most (if not all) activities and events scheduled by some churches this year. That notwithstanding, in this trying period, the church has had to go all out to support needy members during the lockdown period while at the same time dealing with the expected decline in its revenue generation efforts and dwindling finances.

That said, all has not been doom and gloom. This is because the COVID-19 pandemic has taught the church very positive lessons particularly on the need to prioritise personal and family devotional life as much as congregational worship. However, one key legacy of this pandemic is most probably how the Church has been coerced to embrace technology.

Since COVID-19 was declared a pandemic by the World Health Organisation (WHO) on March 12, 2020, church life has never been the same. The increased restrictions on human activities and the general panic that greeted this announcement was evidence of the uncomfortable times ahead.

As a result, church leaders looked for possible ways to reach out and maintain fellowship with their members. In all of the strategies pursued, technology has proven to be the most effective and the tool generally adopted by the Church for the work of the ministry in these turbulent times. This, therefore, sparked widespread use of digital tools by the churches to pursue their evangelism and discipleship mandate.

With The Church of Pentecost, a global Pentecostal church with a presence in 105 countries, the story was no different. The church therefore resorted to her various media outlets, particularly Pent TV and Social Media, as well as other measures like Family Fellowship and Home Cell Meetings to continue to minister to the spiritual needs of her over 3million membership worldwide.

The impact of the pandemic, was, however, well felt in April, when the church had to organise its first-ever virtual Easter Convention. This was, in fact, a foreshadow of what would soon be known as “the new normal.”

After conducting a successful virtual Easter Convention, the leadership of The Church of Pentecost set their sights on arguably the most significant and biggest meeting on the church calendar - the General Council Meetings.

During Council meetings, participants, mainly ministers come from all over the world to converge at a venue - the Pentecost Convention Centre (PCC) - to fraternise, pray together, discuss emerging issues in the church and take key church decisions.

This year's meeting albeit was very crucial because it would witness the election of new members to serve on the Executive Council of the church.

In navigating this, the first step taken by leadership was to issue a circular announcing that the event had been rescheduled from May to June due to obvious reasons in anticipation of eased restrictions and a general decline in active COVID-19 cases.

However, after it became apparent that the pandemic would persist for a while longer, the Church once again resorted to technology and explored how the meetings and elections could be conducted virtually.

In view of this, several consultative meetings were held at various levels, and eventually, AO Holdings Limited, a Digital Solutions company owned by a member of the Church, was contracted to come up with an online election software to conduct the elections virtually across the continents.

After several weeks of hard work, an online election software dubbed “Synergy e-Vote” was presented to the Church leadership by AO Holdings Limited, which was subsequently accepted.

A unique identification number was thus generated for each of the 1,237 registered voters, with which they would be able to access the voting platform to cast their vote.

To test the veracity of the platform and ensure that elections would not be compromised in any way, five mock elections were organised for Councilors before the scheduled date (Wednesday, June 3, 2020).

In the early hours of Wednesday at about 6:00 GMT, Councilors in Ghana converged at the various Area Offices to cast their votes, whilst those in the external nations convened at their respective National Offices to partake in the exercise. Some external Councillors living in lockdown areas were also allowed to vote from home.

In all, out of the 1,237 registered voters, a total of 1,194 votes were cast, 967 of which were cast by Councilors in Ghana, with the remaining 227 by External Councilors.

The entire election process lasted for just an hour. In fact, more than 1,000 votes were cast in less than 15 minutes. At the end of the polls, Apostles Yaw Adjei Kwarteng (Hohoe Area Head), Samuel Osei Asante (Koforidua Area Head), and Isaac Kotei Djani (Tamale Area Head) were all re-elected to serve a second term on the Council. On the other hand, Apostles Sylvester Arhin (Assin Foso Area Head), Dr Dela Quampah (Head of the School of Theology Leadership and Missions), and Mike Etrue (Kaneshie Area Head) were elected to replace members of the Council who have completed their terms.

Apostle James Raj (India National Head) has also been elected onto the Council as the Representative for nations outside Africa. 2020 may be widely touted as the year of COVID-19, but for The Church of Pentecost, it will go down in history as the year when the church organised its first-ever virtual election.

You're A Covenant Keeping Leader — Ahafo Chiefs To Akufo-Add...
41 minutes ago