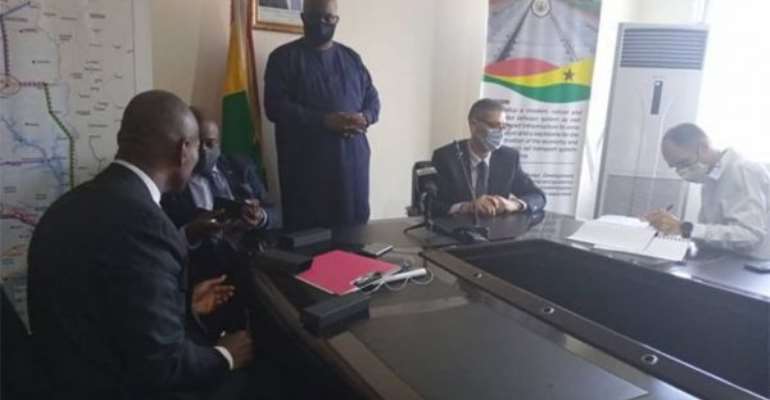 The Ghana Government has sealed a €500 million contract for the construction of sections of the Western Railway Line.

The historic signing is for the construction of a standard gauge rail line between Takoradi Harbour and Huni Valley.

The deal is considered the largest single rail contract in the post-independence history of Ghana.

The contract was signed between the government represented by the Sector Minister and Amandi Holdings Limited.

Speaking at the signing ceremony, Mr. Joe Ghartey said the project consists of the construction of sections of the Western Railway line.

He emphasized that it will form a total of 102 kilometers of a continuous single-track railway line, with sections along the tracks, an initial workshop facility at a location to be specified by the employer, and an initial complement of rolling stock.

According to him, the indicative scope of the works includes the construction, provision, testing, and commissioning of the construction of approximately 8km of standard gauge railway tracks connecting the existing dual gauge tracks in Takoradi to the Takoradi port for easy and efficient access for cargo.

There will also be the conversion of 10.6km the dual gauge tracks between Takoradi to Kojokrom from narrow gauge to standard gauge, adding that “this shall include conversion works and materials involved and supply of 10 new gauge turnouts.”

Mr. Ghartey also noted that the project is to commence hopefully in October 2020 to be completed in 42 months, adding that it will lead to the construction of the railway line from Manso to Huni Valley approximately 60km of single-track lines, and in addition, the construction of 8 basic stations along the existing line from Amantin to Huni Valley including all construction works, station building, access roads, CCTV and access control, backup generator and water tanks.

It shall also include 10km of loop lines and stations’ double lines to improve the availability of the line for express trains, Mr. Ghartey says.

He mentioned that several other activities would be undertaken under the project including the supply of standard gauge track maintenance equipment, construction of workshop facility for standard gauge rolling stock including the basic fit-out, basic tools, and essential machines.

He stated that a provisional amount has been earmarked for the employer’s and engineer’s costs and supervision facilities, including the acquisition of land and payment for affected people, payable by the employer.

He recounted that from 2012 to 2017, a narrow-gauge line was constructed from Sekondi to Takoradi.

“Therefore, even though it commenced in 2012 and was completed in 2017, barely 3 years, we have to convert it to standard gauge in line with the policy that all new constructions of the railway will be standard gauge,” he said.

The impact for the contract cannot be understated, says Richard Dombo, CEO of the Railways Development Authority, who signed on behalf of Government.