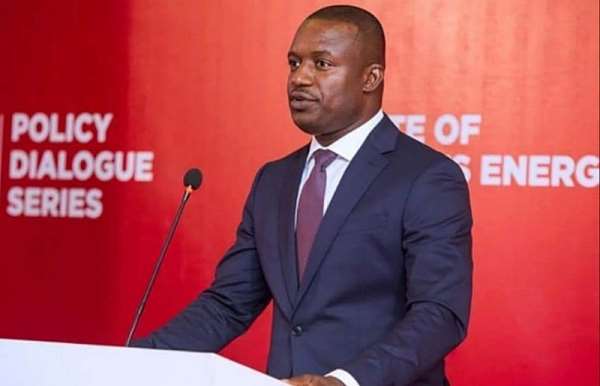 The Member of Parliament (MP) for Yapei-Kusawgu Constituency, Mr. John Abu Jinapor has hit back at the Deputy Energy Minister, Dr. Mohammed Amin Adam over his allegations against former President John Dramani Mahama.

Dr. Adam in a recent interview on the Joy PM Express Show claimed that President Mahama during his administration failed to plan for the Energy sector.

According to Mr. Abu Jinapor who served as a Deputy Minister of Energy during the Mahama administration, those comments are unmistakable signs of desperation and hopelessness emanating from a clueless government that only succeeded in ascending to power through deceit and political jugglery.

The National Democratic Congress (NDC) MP stresses that the statement from Dr. Mohammed Amin Adam portrays that the New Patriotic Party (NPP) government has nothing to show for the past 3 years.

Abu Jinapor believes NPP is resorting to falsehood and propaganda ahead of the 2020 General Elections.

To prove that the NDC made strides when they were in power, the Yapei-Kusawgu MP noted that the Mahama government put in a place prudent policies, legislation, and regulatory frameworks to ensure sustainable and efficient management of the country’s oil and gas resources.

“Whilst in office, the Mahama led NDC government worked diligently to bring into production three oil and gas fields – Jubilee, TEN, and OCPT (Sankofa). We are on record to have procured three FPSO for the three field - FPSO Kwame Nkrumah, Professor John Mills, and John Agyekum Kuffuor. These interventions has culminated in over GHS12 billion accruing to the Akuffo-Addo led Government since 2017 to date”, Abi Jinapor added.

My attention has been drawn to an interview granted by a Deputy Minister of Energy, Dr. Mohammed Amin Adam on the Joy PM express show, in which he chose to make baseless, concocted and outrageous allegations against the person of H.E. Former President John Dramani Mahama.

Dr. Adam proceeded further to make the wild claim that that President Mamaha failed to plan for the Energy sector. His comments could only be an unmistakable sign of desperation and hopelessness emanating from a clueless government that only succeeded in ascending to power through deceit and political jugglery.

The statement from the Deputy Minister only portrays a Government that has nothing to show over the past 3 years hence resorting to falsehood and propaganda.

If the Deputy Minister cares to know, the NDCs record in the oil and gas sector has been impressive and remarkable. The specific claims:

Achievements in the Oil and Gas Sector

The NDC Government whilst in office put in a place prudent policies, legislation and regulatory frameworks to ensure sustainable and efficient management of our oil and gas resources. This provided transparency in the sector and boosted investor confidence. The implementation of the local content policy and regulations soared Ghanaian entrepreneurs’ participation in major procurements for oil and gas installations, including direct contributions to the fabrication of components of FPSOs.

Whilst in office, the Mahama led NDC government worked diligently to bring into production three oil and gas fields – Jubilee, TEN and OCPT (Sankofa). We are on record to have procured three FPSO for the three field - FPSO Kwame Nkrumah, Professor John Mills and John Agyekum Kuffuor. These interventions has culminated in over GHS12 billion accruing to the Akuffo-Addo led Government since 2017 to date.

To ensure an integrated approach in the Gas value, the NDC government established the Ghana National Gas Company and delivered an impressive gas infrastructure that has ensured sustained supply of gas from our gas fields to Aboadze resulting in an annual savings of about $300 Million to the state.

On the claim by the Deputy Minister that no effort was made to ensure the reverse flow of Gas from the West to the East is not only false but a complete deception. The NDC Government did not only commence the process of ensuring the reverse flow but also concluded arrangements to relocate the 450MW Karpowership in Tema as an off taker for the OCTP Gas.

On the contrary, rather than consolidating the gains made, the Akufo-Addo Government chose to engage in frivolous so-called investigations which eventually delayed the completion of the reverse flow project.

The NPP Government should rather explain to Ghanaians the decision to turn around and extend the Karpowership agreement by Ten more years after criticising the deal.

Equally false is the claim by Dr. Amin that almost all the Thermal plants are located in Tema hence it was improper to site the Gas plant in the West. For the record,Takoradi alone has over 1000MW of thermal power coupled with the fact that N-Gas was already supplying the Tema enclave.

Developments in the Upstream Sector

The bold and decisive policies pursued by the NDC that liberalized the petroleum sector witnessed monumental improvements in the sector. Following the oil and gas discoveries, it became necessary to restructure the industry to reflect the vision for the energy sector and to bring it abreast with international norms and best practice. Hence, the reason for the establishment of: the Petroleum Commission, the Ghana National Gas Company, the passage of the Petroleum Revenue Management Act, the new Petroleum (E&P) Act, the Local Content Act, the Gas Master Plan and other laudable policies to attract investment and ensure sustainable exploitation of our petroleum resources.

The phenomenal interest generated in exploratory is reflected in the 13 Petroleum Agreements signed during the NDC tenure of office.

Economic Benefit to the State

If Dr. Amin Adam cares to know the benefit accruing to the State is not measured in the number of wells drilled but rather from the direct and indirect economic benefits accruing to the Nation through increased Stake and local content participation.

The wise decision by President Manama to settle our maritime dispute through the International court though led to a delay in drilling activities is highly commendable. Indeed, President Mahama is a visionary leader who deserves commendation for his foresight and determination to put Ghana first.

Unfortunately, the current NPP administration has rolled back the clock on the progress made. No significant development in the petroleum upstream has been recorded in the last three years since the NPP came to office. The NPP’s mismanagement of the sector has resulted in the obvious waned investor interest in Ghana’s oil sector evidenced by the disastrous maiden bidding rounds for blocks under the NPP.

Corruption has taken a centre stage in the sector with a few people (Cabal) appropriating our oil resources for selfish and personal gain. A typical case is the dubious renegotiated Arker and AGM agreements which were rail-roaded through Parliament.

It will be recalled that soon after assuming office, the Akuffo Addo led government decided against all technical and commercial advice to open the AGM agreement (earlier ratified in 2014 under President Mahama) for renegotiation under bizarre and opaque circumstance.

In the renegotiated agreement, GNPCs additional participating interest was reduced from 15% to 3%. As if that was not enough, Explorco"s commercial interest of 24% was dropped to Zero and 5% ended with a Private Company with very questionable background.

This is the same with the Arker Energy agreement where the Minister granted very ridiculous concessions to the company against the interest of Ghana, and going further to approve clauses that compelled him to follow up on seeking approvals for the company. The question is why would a Minister of the Republic agree to be the "Goroboy" of a foreign Company?

Clearly, the Akufo-Addo government and the NPP have lost focus, hence their continuous resort to total mendacity and sheer political chicanery, but let me assure that we shall remain vigilant and ensure the deception by appointees of this Government are held to check.