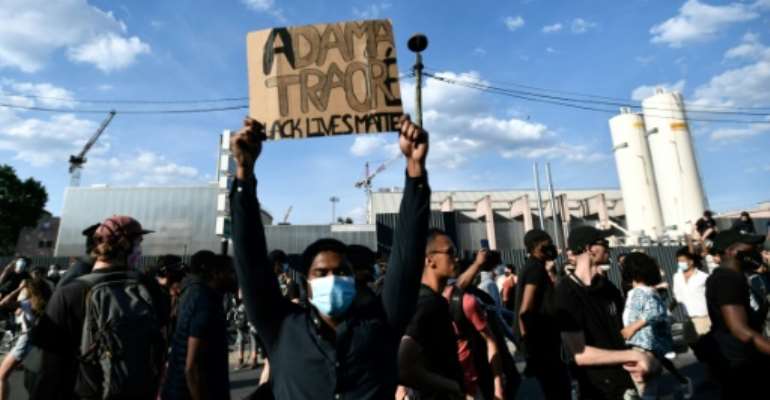 Some 20,000 people protest the 2016 death of a young black man named Adama Traore in French police custody, using slogans echoing those in the demonstrations raging in the US.. By STEPHANE DE SAKUTIN (AFP)

The French government vowed Wednesday to punish any police racism and urged calm after thousands took to the streets in a tense rally remembering the death of a black man in police custody that echoed anger over the killing of George Floyd in the United States.

Some 20,000 people rallied in Paris late Tuesday to remember the 2016 death of 24-year-old Adama Traore, some clashing with police and brandishing slogans that referred to the protests sweeping the US.

The death of Traore has long been a rallying cause for critics of the French police force, who argue it is shadowed by institutionalised racism, a charge the police deny.

The French protests Tuesday night came as thousands across the United States defied curfews for another night of rallies against police racism following the death of Floyd, an unarmed African-American who stopped breathing as a police officer was filmed kneeling on his neck.

Traore died after he was similarly pinned to the ground with the combined body weight of three arresting officers, according to the testimony of one of them.

On Wednesday, France's Interior Minister Christophe Castaner vowed that "every mistake, every excess, every word including racist expressions" would be "the subject of an investigation, a decision, a punishment".

"If there is a mistake (in the police), it must be punished and it is punished," he insisted, pointing to several instances of law enforcers brought to justice over misdeeds.

However, she urged "appeasement" and said France must "keep a degree of moderation ... given that the legitimate emotion aroused by the death of Adama Traore is still very present in our country." 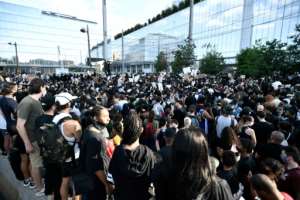 Protesters gather in Paris for a demonstration after French medical experts exonerated the gendarmes involved in the arrest of Adama Traore, a young black man who died in police custody in 2016.. By STEPHANE DE SAKUTIN (AFP)

Ndiaye said the government had every confidence the justice system would get to the bottom of what caused Traore's death, while urging "a very cautious approach to these issues".

On Tuesday, demonstrators threw projectiles at police who used tear gas to disperse them, followed by sporadic clashes as protesters and police targeted each other with stones and rubber bullets.

Some protesters burned bins, bicycles and scooters to set up flaming barricades on the streets.

Many of the French protesters drew inspiration from the US riots, holding up slogans in English stating "Black Lives Matter" and "I can't breathe" -- the last words uttered by Floyd.

Traore's sister Assa told the Paris crowd this was a fight not just for their family, but for everyone. "When we fight for George Floyd, we fight for Adama Traore," she said.

Following a dispute over an identity check, Traore was apprehended in a house where he hid after leading police on a 15-minute chase in 2016.

He lost consciousness in their vehicle and died at a nearby police station. He was still handcuffed when paramedics arrived.

Last Friday, French medical experts said Traore did not die of "positional suffocation", ruling out the officers pinning him to the ground as the cause of his death.

But on Tuesday, a new probe commissioned by the Traore family said his death was indeed caused by the arrest technique used. There had also been conflicting findings on Floyd's death in America.