Why Africans Must Support The Campaign Against Racism In The US 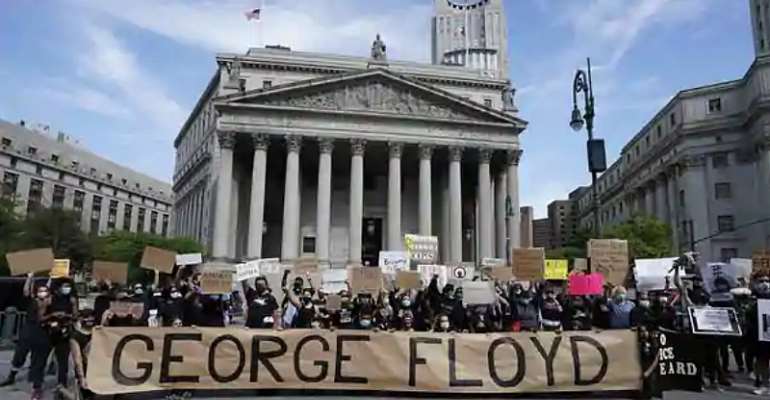 Courtesy of social media, most people across the globe were able to witness the gruesome murder of yet, another African American man, George Floyd, by a white police officer for an inconsequential crime of allegedly buying merchandise with a counterfeit $20 bill last week.

Most readers in the last few decades I assume, have observed similar incidents of Police brutality on Black Americans either on the news or social media which ultimately led to the famous international activist movement, Black Lives Matter in July 2013.

In the past week, internet users who saw the six minutes video of a police officer pressing his knee into Mr. Floyd's neck as he lay pinned on the ground in handcuffs have poured out their heartfelt messages expressing anger and sharing their thoughts on social media, mostly condemning the police officer and how the United States of America has failed the African American Community.

What caught my attention was a post from a fellow Ghanaian who argued why Ghanaians should be bothered with the death of an American when we have similar issues of our own in this country nobody talks about. "If Ghanaians had expressed interest in Tadi girls the same way they are concerned with Floyd, I'm sure those girls would've been found and rescued" he posted.

I honestly found the comment intriguing and ignorant at the same time. Yes! I found it interesting to see people who barely shared the images of the missing girls on their various media platforms but was quick to post the murder video of Floyd multiple times on their social media timelines. I however felt the ignorance in the comment for failing to appreciate why the African American's death is bigger than the Tadi girls.

I know what you are thinking and before you curse or vilify me just hear me out. Of course, who cares about the death of one person in America when armed robbery, ritual killings, and other premeditated murders claim dozens of lives in Ghana each year? Well, every single human life matters regardless. Needless to say, people still get killed for various selfish reasons and that has always been part of all societies. So why is Floyd's any different?

Murders occur everywhere. Africans kill Africans, whites kill whites, Asians kill Asians Indians do the same but when a particular murder is openly committed with the impunity to demonstrate racial hatred, you do not need to be a relative of the victim or be an American to show concern. I believe that is a direct assault on the blackness and personality of all black people. What do you think would happen if a Ghanaian of European descent was openly strangled to death on camera by our police officers?

When the most influential global superpower that supposedly champions its self with human rights and freedom, systematically and blatantly oppress members of your race simply because of the color of their skin, you should be terrified regardless of your nationality and geographical location! We are upset because of the motive behind his murder, which is perennial racism!

The public outcry is not about death per se. People die every day. It is about the fact that your race and mine, the black race is globally regarded as inferior and is continuously scorned. And don't get me wrong; The whites, Asians, Indians, and every other race presumably feel superior to Blacks. If not, why don't they reciprocate the same respect we show them? Why do Africans in Europe, America, Asia, Australia, and even our own land Africa, have to deal with racism daily? Just why?

If you have ever lived in China, you probably know that the people are notoriously racist and it is always targeted at black people. They still put up signs at restaurants and bars that strictly restrict black people from entering. In the past few weeks, things have gotten worse for African students and traders after the government accused them of spreading COVID 19; the global pandemic China started which has killed over 4,000 and infected close to 150,000 people in Africa.

Meanwhile, most of these foreigners have emigrated to Africa with their entire families and are enjoying the freedom most of the locals barely benefit from. Just last month, the Zambian government was forced to close down a Chinese restaurant in the capital, Lusaka, after denying a Black Zambian man entry on the basis that the man is a foreigner. At this point in our human civilization, black people still have to deal with hate and discrimination both at home and abroad.

I understand if you still do not care probably because you have never encountered racial bigotry. How about your families, friends, and colleagues who have to go through this physical and psychological abuse? Did it ever occur to you Mr. Floyd could have been your uncle, brother, father, husband, nephew, or son living in the United States? Yes! it could have been him. It could have been any other black man.

-The forces that unite us are intrinsic and greater than the superimposed influences that keep us apart – Africa Must Unite. Dr. Kwame Nkrumah.