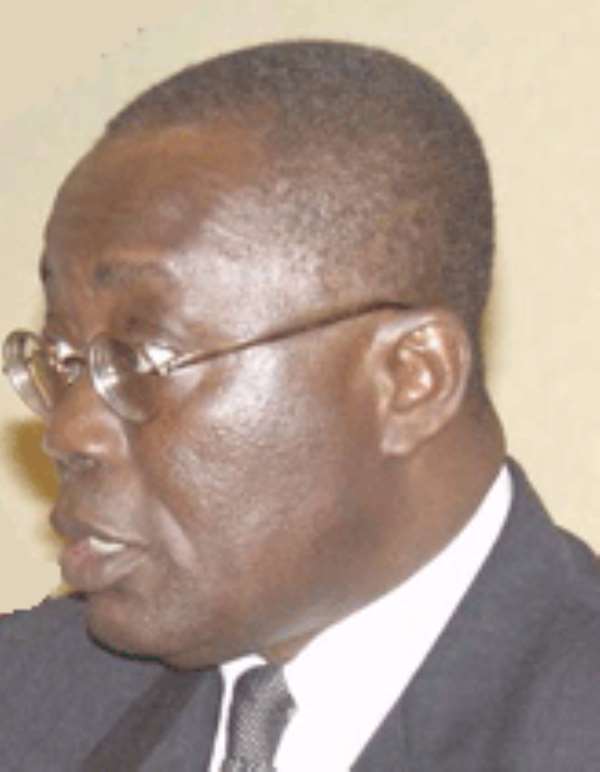 Nana Addo Dankwa Akufo-Addo, the Minister of Foreign Affairs, NEPAD and Regional Co-operation, has asserted that he remains the best hope for the New Patriotic Party (NPP) to retain power in the 2008 general elections.

He also gave the assurance that his stature as a team player and one who had the stomach to accommodate all manner of diversities placed him in good stead to unite the nation and prosecute a sustained agenda of national development that would improve the conditions of life for all.

The leading NPP member was speaking to the Daily Graphic at his office in Accra, during which he formally declared that he was in the race for the flag bearer position of the party for the 2008 general election.

“I am definitely in the race and better placed to lead the party into the next general election. I am well positioned to carry the NPP from where it will be left off by President J. A. Kufuor in 2008, which, no doubt, will be an impressive legacy to the dawn of a new era of more development in freedom and progress and a better life for all Ghanaians,” he said.

According to Nana Akufo-Addo, his years as a grass roots political activist and leading member in the Danquah/Busia tradition had equipped him with the relevant political skills and experience to carry both the NPP and the nation as a whole to the better Ghana everyone yearned for.

“If ever there was the need for a personality within the Danquah Busia tradition to carry forward the legacy of the Kufuor administration and further improve upon it, unify the NPP and the nation, for the benefit of the people, that torch bearer is Nana Akufo-Addo,” he said.

Asked whether support for him in the party had not waned, given his inability to conduct a personal campaign to market himself in the party, Nana Akufo-Addo said that on the contrary his popularity had been boosted by the commitment he was showing to working to achieve the campaign promises and the overall manifesto of the NPP.

“I believe I command substantial support in our great party and I can say with all humility that the members of our party will repose their confidence in me to lead them into the 2008 polls because they know what I have done, been doing and still can do for them and Ghanaians as a whole,” he said.

He added that he remained the man to beat.
To the question as to why he had not abandoned his ministerial position in order to personally embark upon a nation-wide tour to market himself like other aspirants had done , Nana Akufo- Addo said, “I believe it is more important to first work to achieve the goals our party set and upon which the mandate to govern was secured for us”.

“It is more important to work to build a winsome party that meets the expectation of the people and therefore stands a better chance of re-election than many individuals embarking upon solo campaigns.

It is the NPP as a party that will help any candidate get elected. Therefore, the need to strengthen the party and the government through hard work and sacrifice cannot be over emphasised,” he said.

Nana Akufo-Addo pointed out that after its second term in office, it would be the record of the NPP government that Ghanaians would scrutinise in the run-up to the 2008 elections and that everything had to be done to ensure that it met the expectation of at least most Ghanaians, who had the power to return it to power or reject it.

“The party is yet to come out with modalities and rules for the contest and as soon as these are done, I will hit base within the rank and file across the country,” he said.

On the issue of the baggage of this government that the flag bearer would have to carry, the foreign minister acknowledged that no government could be in power for eight years without any baggage but hastened to add that what was more important was the balance that the government was on the positive side.

He pointed to the stabilisation of the economy, reduction in inflation and interest rates among other micro-economic successes, as well as the deepening and broadening of the democratic process, good governance, the prevalence of the rule of law and fundamental human rights and freedoms, as feats chalked up by the Kufuor administration and which were universally acknowledged.

On whether or not the NPP should call an early congress to elect its flag bearer, Nana Akufo- Addo said the current constitutional stipulation of one year to a general election appeared suitable.

“One year to a general election appears all right for the party to unify and mobilise resources to prosecute a successful campaign,” he said.

Nana Akufo- Addo described the recent election of Ghana to the Human Rights Council of the United Nations as “a big vote of confidence in Ghana and our democratic and human rights regimes”.

“This decision which gave Ghana the highest vote of 183 out of the total 191 members of the UN General Assembly will also contribute to strengthening the protection and promotion of human rights and fundamental freedom in the country, as well as elsewhere in Africa and the world,” he said.

He called for uniform application and enforcement of human rights provisions across the globe and said that no nation, however powerful, must be allowed to relax or renege on such standards.

He said that the world was moving towards an era of greater freedom for all peoples and that no nation should be left behind.